'It's been a long time in the making': Guns N'Roses Locked N'Loaded box set unwrapped 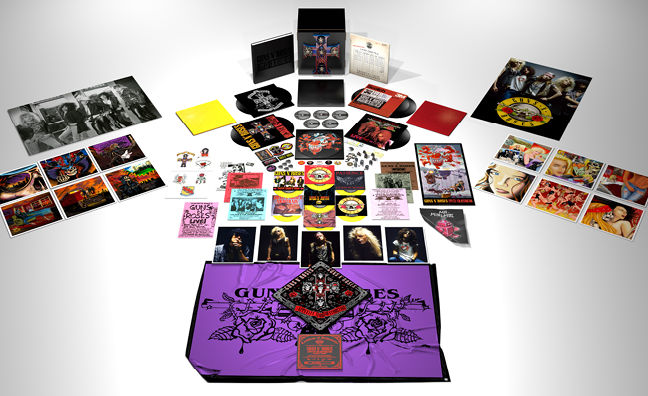 Download Festival headliners Guns N'Roses have gone above and beyond with the imminent reissue of their 1987 classic debut album Appetite For Destruction.

Appetite For Destruction (Geffen) is one of the biggest-selling albums of all-time, moving more than 30 million copies worldwide. In the UK, it has racked up post-1994 sales of 1,216,017, according to the Official Charts Company.

Its Locked N'Loaded edition includes five discs, seven LPs and seven 7”s, along with a myriad of collectables and unreleased tracks from the Appetite recording sessions. Retailing at £849.99, it is limited to 10,000 copies globally.

“It opened up the conversation to what we could do on the catalogue," he said. "We’d always wanted to do something special with Appetite For Destruction, it is one of those generation-defining records that we always felt needed special attention from a market perspective. It was an exciting moment for us when we found how receptive the GNR camp was to the idea.”

Here, Daw and Richard Hinckley, co-MD of Universal Music Catalogue give Music Week the inside track on what happened next...

How did the Locked N'Loaded project come together?

Andrew Daw: “In a word, ‘Fernando’. It started with a call on November 19, 2015 with Steve Berman at IGA, who has a longstanding relationship with the band and had been talking with Fernando Lebeis from [GNR Management] Team Brazil. Fernando let us know the Coachella dates were going to happen and asked us to explore what we could do with the catalogue.

"Over the years, fans and collectors talked about recordings that were known about but never released. We organised a list of the content and music and a small internal group including Bruce Resnikoff [president/CEO, UMe], Andrew Kronfeld, [EVP marketing, UMG]; Jeff Fura [senior director A&R, UME]; and other key members of UME/IGA concentrated on Appetite For Destruction specifically and we launched it from there.

“We got together with Fernando, who has been absolutely fantastic to work with on the project, and we started on the music content. Jeff Fura started pulling tapes from the vaults and we would regularly find gems. As we sourced the resources, we found all the original analogue tapes for every single piece of music. We have had almost daily contact since with Fernando, band members and wider management involved with GNR across the past two years.

“It’s been a long time in the making, has been very confidential for long periods and a huge task to keep an exciting secret for almost three years. From the start, we wanted to give the GN’R world the best project we could. It sounds so incredible, people are going to be blown away from the remaster all the way to the 5.1 mix, to the rare and unreleased material. And when you actually see the box, your jaw will drops, it’s a custom art piece.”

What was the marketing strategy?

Richard Hinckley: “When you have an album that means so much to so many people, it’s often for different reasons. Accordingly, we’re developing strategies that engage those different audiences in ways that are distinct to each. Whether we’re speaking to a rock fan from the '80s for whom the band and this album were incendiary when it was first released, where the deep archive video and music is key, or it’s a teenager who owns a T-shirt because the imagery is so captivating, and we can introduce them to listening to tracks beyond those they’re familiar with. Our marketing runs across social, video, experiential and promotional channels, as well as a high-profile ad campaign.”

How did you settle on five separate versions?

AD: “Once we reviewed the vault tapes we started finding some really unique material like original flyers, tickets, unseen photos. Added to this, Fernando began to open up some of Axl’s personal archives and we had some uber fans who had a lot of collectables that we were able to incorporate. If you look at all of our flagship catalogue projects, we would usually put together a super deluxe, deluxe, LP and remaster. In relation to Locked N’ Loaded [Edition] we realised quickly we had something very special with additional material that wasn’t just music based, music we could add to additional formats we couldn’t have in the other configurations.

"We then looked at a variety of format options for Locked & Loaded but it became very much about consciously not creating something really special, the all bells and whistles set. You can’t put something this immersive in a card box. We then made the decision to make this particular format available directly to fans in order for us to have this available at the best competitive price for the fans. Essentially, we wanted to create something really special that the band are happy with and the fans would be excited about. Judging by the early reaction that’s certainly the case across the world.”

What is Appetite For Destruction’s legacy?

RH: “Aside from the fact it changed the course of my life when I bought it in 1987 its impact was, and continues to be huge. They influenced so many artists that followed, but they also set the bar for quality – every track is outstanding.”

Guns N'Roses headline Download 2018 tomorrow night. Click here to read the inside story on their record-breaking Not In This Lifetime... reunion tour.