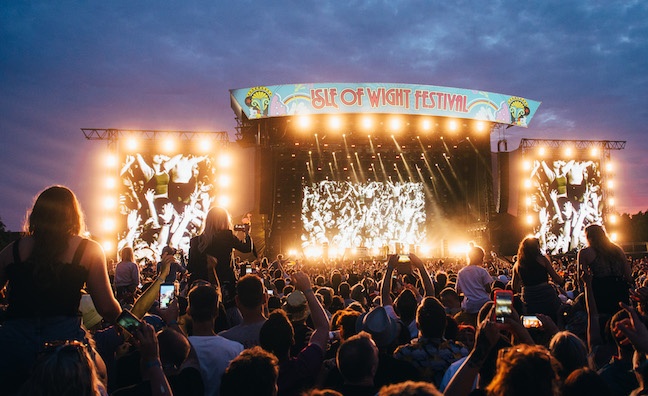 The Isle Of Wight Festival is back for its first edition since 2019.

The festival site opened yesterday and gets in full swing this weekend (September 17-19) with headline performances from Liam Gallagher, Snow Patrol, David Guetta and Duran Duran.

This year’s edition has moved back from June to September because of the Covid uncertainty earlier this year.

How are you feeling about this year’s festival?

“It’s going to be fantastic, 50,000 people a day. It's great that we moved it from June to September, that was the best thing we did. It gave us the opportunity to refresh the line-up, adding Liam Gallagher, for example. The reaction is phenomenal, people are really excited about it. My wife has been running the Covid testing for staff and crew at all the Live Nation shows, and so I've been to about 10 shows so far. Audiences can't wait for it.”

What's your policy for allowing entry to the event?

“You’ve got to have two jabs 14 days prior, proof of a lateral flow test or exemption, the same as everywhere else. We’re definitely requiring it, there’s [government] guidelines and I want people to be protected.”

There have been some Covid outbreaks. Have you been monitoring other festivals?

“Yeah, but what they like to do is blame the local festival for a flare-up. If you look at Cornwall this summer, there were 10 times as many people as there would normally be. And then they blame it all on Boardmasters. We're going to have to learn to live with this, aren’t we? Otherwise we won't be able to do anything, ever. ”

Has the government-backed insurance scheme helped?

“No, it’s just too expensive. There are so many caveats within it, I find it hard to understand how anybody would be able to make a claim.”

Does it help having Live Nation as a partner for the festival?

“It’s great, I’ve worked with Live Nation for years, booking tours for them in Europe with U2, the Rolling Stones, Madonna. I've grown up with all the people in that company. I think if I didn't work with them, I’d find a horse’s head in my bed!”

And, particularly, with the challenges of the pandemic?

“What Covid has done is bring in another level of money we have to spend to make it happen. The same way when terrorism first occurred, we had to up our security.”

How much did you manage to refresh the line-up after last year’s event was forced to cancel?

“Duran Duran and Snow Patrol carried over. But hopefully the ones that couldn't do it in September will come back [and play] next year. We've already confirmed our headliners for next year, and we're going to announce shortly after this year, because there’s a well of support.”

Are you pleased to have Duran Duran closing the festival as they ready a new album?

“They’re like the Stones, they’re still big even though it's been a long time since they’ve had a hit. They’ve got a great catalogue, they’re great performers and the audiences go wild for them. They’re the perfect act for us, actually.”

“It took me a couple of years to work it out. I book acts from the past, present and future. The demographic runs from 12 to 60. So you get an audience that isn't as misbehaving as some other festivals. We judge the artist by the quality of their performance, not by the Top 10 last week.”

Sam Fender is an exciting new talent on the line-up...

“I’ve seen him play two shows so far, he’s absolutely brilliant. When you're booking a festival in a wet and windy Fulham in November, you have to think about artists and where they're going to be in eight months’ time. Sometimes you get it right, sometimes you get it wrong. I remember with Rag’N’Bone Man, we hit the nail on the head, it was fantastic. So it's a great job to be able to predict and to get involved with artists in the early stage to help break them.”

And what are your hopes for David Guetta on Saturday night?

“His show is incredible. It's going to blow up the island judging by the amount of fireworks and lasers we've got for him.”

What’s the plan for 2022 and the 20th anniversary of the revival of the festival?

“We'll move back to June. What we've done this year is moved from first to last of the season. We will go back to being the first of the season next year.”