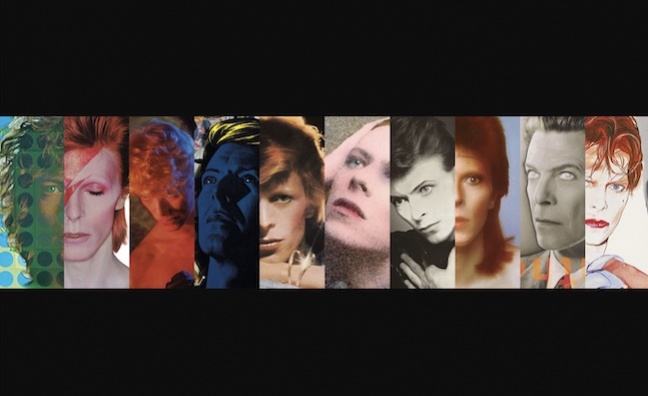 Warner Music Group and the estate of David Bowie have signed a global, career-spanning partnership for the music icon’s recorded music catalogue.

It follows WMG’s recent partnership with Madonna across her catalogue.

With this landmark new deal, Warner Music will now have worldwide rights to five decades of Bowie’s music. It follows the huge success the major has had on reaching streaming audiences with Bowie, including TikTok. Music Week has revealed the full extent of Bowie’s streaming impact.

Expanding on Warner Music’s current agreement with the estate, which encompasses Bowie material from 1968 to 1999, the new licensing agreement will include the entirety of Bowie's 2000-2016 creative outpouring. Bowie’s latter releases were previously licensed to Columbia/Sony.

Heathen, Reality, The Next Day, and the worldwide No.1 album Blackstar, released shortly before Bowie’s death in 2016, are among the acclaimed works that will come into the Warner Music fold in 2023.

Much of Bowie’s catalogue became part of the Warner Music family in 2013, when WMG acquired the historic London-based Parlophone Label Group. Since then, Warner Music and the Bowie estate have jointly embarked on an extensive, award-winning programme of releases.

Prominent among the flow of recent Bowie releases has been the Era series of box sets, each one covering a key period in Bowie’s career.

Guided by Bowie’s vision for his catalogue, Nigel Reeve – Warner Music’s SVP, content development & marketing, global catalogue, has worked in close partnership with the Bowie estate to curate and present a release campaign celebrating Bowie’s unparalleled legacy, with many more releases to come.

Max Lousada, CEO, recorded music, Warner Music Group, said: “It’s an incredible honour to have been chosen as the stewards of one of the most important and dynamic bodies of creative work in modern culture. The impact of Bowie’s repeated reinvention and endless experimentation continues to resonate around the world – through the genres he transformed, the timeless songs and sounds he invented, and the immeasurable influence he’s had on music, art, and fashion. We’re excited that our expanded partnership with the Bowie estate will help us deliver innovative, career-spanning projects and attract new generations to his extraordinary musical universe.”

Kevin Gore, president, global catalogue, Warner recorded music, added: “To be entrusted with this phenomenal body of work is truly gratifying. For the past eight years, we’ve enjoyed a wonderful relationship with the Bowie estate, collaborating on a fantastic series of releases. Nigel and our entire catalogue team have taken great care to be thoughtful and steadfast in our promise to stay true to his artistic vision, while revealing previously unheard music and framing his genius in fresh contexts. With the addition of his immensely powerful later work to the Warner Music portfolio, we’re looking forward to bringing Bowie’s music to fans across the globe for many years to come.”