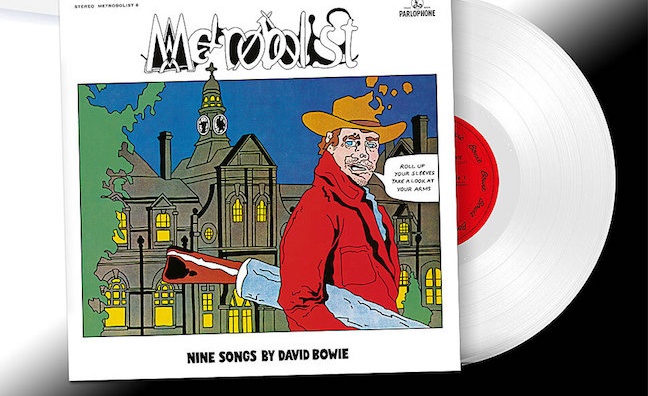 Rhino/Parlophone are releasing a 50th anniversary edition of David Bowie’s The Man Who Sold The World.

The album is being reissued by Warner Music’s catalogue division under its original title, Metrobolist.

The 2020 re-release has been remixed by original producer Tony Visconti, with the exception of the song After All, which Visconti considered perfect and is featured in its 2015 remaster incarnation.

Artwork for the new edition is based on the original design, which was used for the first US edition in 1970. The name was changed at the last minute to The Man Who Sold The World (the original stereo master tapes had the title crossed out). The album was released in the rest of the world in 1971.

“Frankly the first thing I would listen to, I think the most creative of the early stuff was probably The Man Who Sold The World,” he said. “I really like that album a lot. I did actually, because of hooking back up with Tony [Visconti on 2002’s Heathen], I did listen to it and it’s really got some interesting musical ideas apart from anything else.”

Bowie suggested it was a better album than 1972’s The Rise And Fall Of Ziggy Stardust And The Spiders From Mars, his global breakthrough LP.

As well as an 180g black vinyl edition, the reissue will come in limited edition handwritten numbered copies on gold vinyl and on white vinyl.

David Bowie was an incredible self-archivist

Rhino UK’s director of catalogue marketing, Stuart Wheeley, said he was excited to be working on music from Bowie’s early 1970s heyday for both physical releases and streaming.

“David Bowie had such an incredible and varied career,” he told Music Week. “With so many albums, you can contextualise them [on streaming] into certainly genres and moods. That makes him just so wonderfully accessible, it’s just such an incredible catalogue to work on.”

He added: “We do have lots of plans for Bowie, there's always so much to do. He was an incredible self-archivist and worked incredibly hard. We’ve got the 50th anniversary of The Man Who Sold The World, and there’s plenty of stuff that we’ll be looking at.”

The Metrobolist 50th anniversary artwork has been created by Mike Weller, who was behind the ‘dress’ cover that Mercury Records refused to release in the US in 1970. The gatefold sleeve also features many images from the Keith MacMillan shoot at Haddon Hall that ultimately produced the cover of the The Man Who Sold The World album in the world outside the US in spring of 1971.

Bowie personally delivered the Metrobolist concept and his gatefold plan to the record company for production. Fifty years on, it can finally be seen much closer to its original concept.

Speaking in 2000, Bowie said of the sleeve design: “Mick Weller devised this kind of very subversive looking cartoon and put in some quite personalised things. The building in the background on the cartoon in fact was the hospital where my half brother had committed himself to. So for me, it had lots of personal resonance about it.”