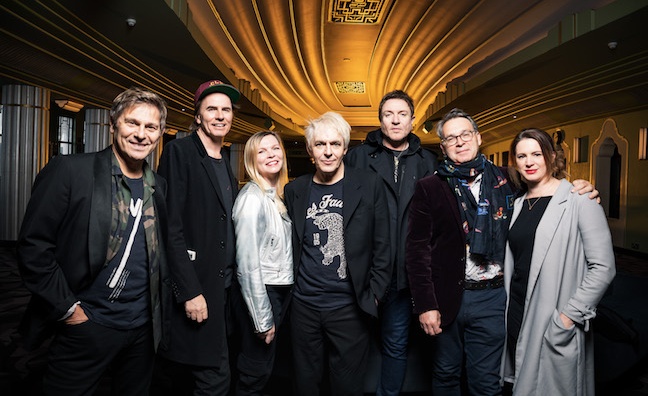 Duran Duran have signed to BMG for their new album, as well as their post-1997 back catalogue.

The band are the latest big name to move to BMG, which recently secured a deal for Louis Tomlinson’s new album and signed up Craig David.

“BMG has been built on working with iconic artists and so we are truly honoured to partner with Duran Duran on their outstanding new album Future Past,” Alistair Norbury, BMG UK president, repertoire & marketing, told Music Week. “After selling 100 million albums, there is still an ever-present hunger and vitality emanating from the band as evidenced in the stunning new music and pioneering visuals. After 40 years this is a band as relevant as in 1981.”

Duran Duran’s John Taylor added: “We are very happy to be in partnership with the BMG label group internationally. We feel this is a great fit for us and look forward to doing fantastic things together.”

Future Past is Duran Duran’s first album in six years. 2015’s Paper Gods was released by Warner Records and peaked at No.5 in the UK (40,294 sales to date). The band headline Isle Of Wight Festival in September.

BMG will oversee a major international campaign for the record. The company had global success last year with Kylie Minogue and scored the biggest UK debut of 2020 with KSI, who releases a follow-up in July. Kylie Minogue’s Disco campaign was this week revealed as the victor in Music Week & Facebook’s Digital Marketing Masters.

Wendy Laister, of Magus Entertainment, said: “We have known members of the BMG senior management team for a number of years, and long felt that this would be a great home for the band. With this new deal, we have been able to bring together Duran Duran’s forthcoming studio album, and a number of key titles from their back catalogue – some of which are now available for the first time outside North America.

“It’s a good feeling to have a very experienced global team behind you who really understand not only the DNA of the band, but also their goals for this new record. We launch the campaign today, around the world, and could not be more excited.”

Catalogue albums BMG has secured include Medazzaland, Pop Trash, Astronaut, Red Carpet Massacre and All You Need Is Now. The company recently partnered with investment firm KKR on recorded music and publishing acquisitions.

The lead single Invisible, which is released today (May 19), had its world premiere this morning on BBC Radio 2’s Zoe Ball Breakfast Show. The official music video was created by an Artificial Intelligence called Huxley and comes out ahead of the band’s worldwide exclusive televised performance of the track, set to air live from London on the 2021 Billboard Music Awards, on Sunday, May 23 on NBC in North America.

“Sonic architecture has always been incredibly important to Duran Duran,” said Nick Rhodes. “I think, with Invisible, we really have managed to carve the sculpture the way we wanted it. Sonically, it's a very unusual piece of music. I think when you merge all the instruments together, it creates an overall sound that perhaps you haven't heard before.”

Duran Duran have worked with 360 Reality Audio, an immersive music experience using Sony’s spatial sound technologies. The first release from this collaboration will be their new single Invisible, followed by 360 mixes of their upcoming album and their back catalogue. 360 Reality Audio is on supported streaming services Amazon Music HD, Tidal HiFi, and Deezer HiFi.

The official video for Invisible also features a simulated 360 Reality Audio Experience where fans can immerse themselves in the music with any pair of headphones.

“As a band we’ve always looked to new technology for a way to enhance our sound,” said Nick Rhodes. “The Sony 360 system brings a new and different dimension to the tracks.”

Simon Le Bon said: “When we first went into the studio in late 2018, I was trying to persuade the guys that all we needed to do was write two or three tracks for an EP.  Four days later, with the nucleus of 25 plus strong songs in the can, that all deserved development, I realised we’d be in it for the long haul, but that was before Covid.

“So here we are in 2021 with our 15th studio album, Future Past straining at the leash. Music by Duran Duran with Graham Coxon, Lykke Li, Mike Garson, Erol Alkan, Mark Ronson, Giogio Moroder (for God’s sake!). I’m not saying it’s epic, but well ... yes I am. We open with the song Invisible, which began as a story about a one-sided relationship but grew into something much bigger, because ‘a voiceless crowd isn’t backing down’. John and Roger’s rhythm track is mountainous; Nick’s melodies twist and soar; Graham’s guitar is a knife. It feels exactly right for right now.”

The band members collaborated with Japanese artist Daisuke Yokota on both the front cover of the single and their forthcoming album. Nick Rhodes first met Yokota in 2019 when he was in Japan making a documentary on post-war photography.

As well as the standard CD of Future Past, a limited edition deluxe hardback book CD format will be available featuring three additional tracks. The album will also be available on coloured vinyl. The official album store will offer exclusive vinyl and cassette formats with limited edition signed prints.