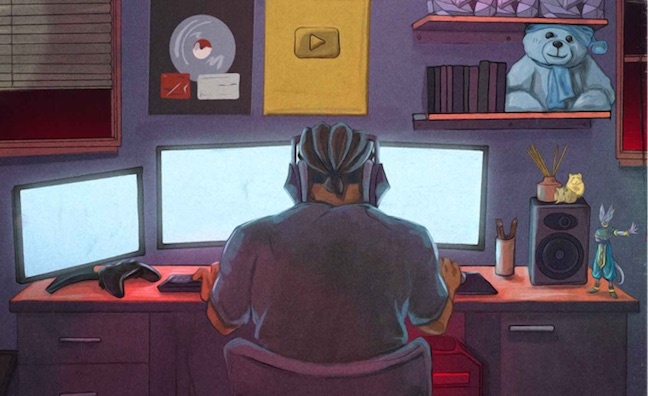 KSI has confirmed that he’s coming back with his second album in summer 2021.

The UK rap star spoke about his ambitions for the follow-up to his No.2 debut Dissimulation in Music Week earlier this year. Dissimulation was the biggest UK debut released in 2020 and has sales to date of 93,687, according to the Official Charts Company.

All Over The Place (BMG/RBC) is released on July 16 and features a roll call of star collaborators. As well as KSI’s recent run of singles Really Love, Don’t Play and Patience featuring Craig David, Anne-Marie, Digital Farm Animals, Yungblud and Polo G, the album is set to feature US rap stars alongside a diverse line-up of UK talent.

Future and UK-born, US rapper 21 Savage guest on the track Number 2, while Lil Durk appears on No Time. Flash It features singer, rapper, songwriter and producer Rico Love.

KSI and his team will be looking at US opportunities for this campaign. The rapper and Yungblud performed Patience last week on The Late Late Show With James Corden.

KSI said: “I’m super excited for the people to hear this album. I’ve improved on everything I did with Dissimulation. The singing has improved. The writing has improved. The beats have more layers to it, I’m a lot more experimental, I’m way more comfortable on the mic etc. This album is a reflection of a lot of hard work and passion combined and I'm really proud to be releasing it.”

KSI – real name Olajide ‘JJ’ Olatunji – has also announced details of his biggest live headline show to date at The SSE Arena, Wembley on February 25, 2022. Tickets go on sale to the general public on May 1.

On his headline Wembley show, KSI said: “To say I’m in shock, is an understatement. I can’t believe I’m in a position where I can play at Wembley. It’s all a bit crazy. I still remember times when I struggled to sell out 100-capacity rooms in the UK, and now I’m at a point where I’m going to be performing in front of thousands in such an iconic arena. I’m so ready for this and I can’t wait to see you all there for the ultimate ride.”

This one-off show will follow his sold-out UK tour in October 2021, including a date at O2 Forum Kentish Town. KSI is also confirmed for Reading & Leeds Festival.

A bonus track from the album will be released as a single on June 18. KSI will perform the single on Channel 4's Sunday Brunch on July 25.

The track Madness addresses his success and the doubters who questioned the YouTube personality’s move into music. No Time is about his work ethic, how he remains focused and maintains his presence online with his millions of followers.