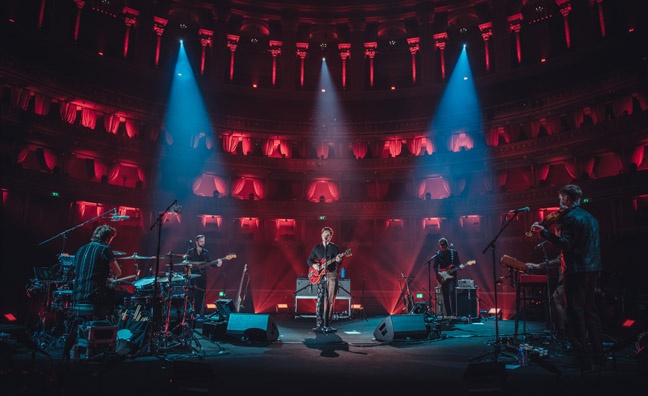 The Music Managers Forum (MMF) and Featured Artists Coalition (FAC) have sent a joint letter to PRS For Music, calling for rethink over the collection body's "unviable" proposed tariff for livestreamed events.

The PRS tariff for concerts increased to 4.2% in 2018 (with a lower rate of 2.5% introduced for festivals) following three years of negotiations. However, according to the MMF and FAC, PRS has proposed that ticketed or sponsored livestream events should be subject to a tariff of between 8% and 17% of gross revenues - and intends to levy the charge retrospectively.

"Even worse, these seemingly arbitrary terms have been determined without consultation, and with an intention that they be applied retrospectively - a decision that will add to the grave financial distress facing artists and their wider teams especially in the midst of a pandemic."

The explosion in livestream shows has been one of the few plus points of 2020 for the beleaguered live business, with last weekend's Dua Lipa's Studio 2054 extravaganza attracting an estimated five million viewers worldwide, while UK-based livestream business Driift revealed ticket sales totalling more than 150,000 tickets for recent performances by Niall Horan and Kylie Minogue.

"Everyone agrees that songwriters must be compensated and livestreams licensed properly. Indeed, the vast majority of our members are songwriters or their representatives," continues the open letter. "But in a year when live shows have effectively shut down, and with more uncertainty ahead, livestreaming has presented artists with one of their few opportunities to perform and connect with their fans.

"The larger most-successful events involve significant production costs, and have provided a lifeline to crew and other industry workers. At the other end of the scale, livestreaming has been increasingly important for emerging artists and those operating in niche genres.

"For the sake of all artists, songwriters and the wider industry, it is crucial that this new format is allowed to grow and thrive. Charging artists up to four times the live rate strangles rather than nurtures this innovation. For some of the smaller artists who have just covered their costs livestreaming, it will be impossible to find this additional money retrospectively."

PRS has issued its own statement in response. "PRS For Music members, alongside many others across our sector, have been very badly impacted by the shutdown of live music this year," it said. "We welcome the many initiatives to move live concerts online and PRS For Music has designed an Online Live Concert licence, which will allow the necessary rights to be licensed.

"The proposed pilot licence scheme is still evolving. As conversations with our partners are active and ongoing, it would not be right for us to provide further detail or comment at this stage while we await their assessment and feedback. Of course our primary role is to protect our members’ rights and to ensure they are paid fairly for their work, which is more important than ever now. We hope that these conversation will progress quickly."