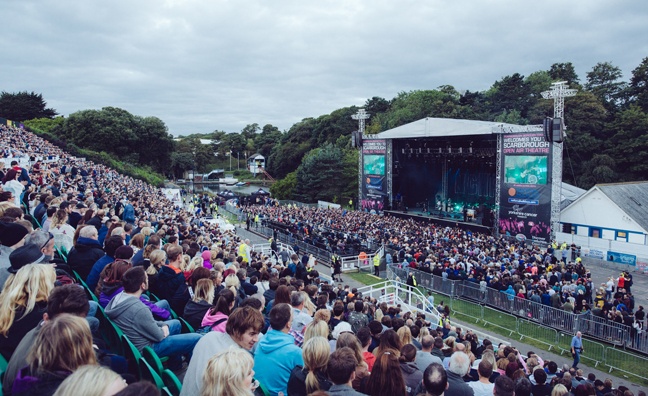 The promoter signed a five-year agreement in 2015 to run 12 shows a year at the North Yorkshire theatre, which was previously run in-house by the local council. Paul Gregg’s Apollo Resorts & Leisure originally operated the 1930s-built venue when it reopened in 2010.

“Our audiences are up 40% on what the council did last year, so we’re very much making it work,” director Peter Taylor told Music Week. “We were very much on the back foot [for this year] because we were still doing the deal with the council up towards Christmas [2015]. Now we've got the venue, we're ready to come back with a more robust plan. I'm already programming shows for next year.”

Despite hosting successful shows by the likes of Elton John, Boyzone, Olly Murs and Status Quo, a number of other concerts at the outdoor site had been plagued by poor ticket sales, prior to the change in management. Its reversal in fortunes is partly attributed to Cuffe & Taylor installing a temporary 2,000-capacity standing area over a lake situated in front of the stage, bringing its overall capacity to more than 7,500, which has helped it attract higher-profile artists.

“It had been done once before [for the Elton John show in 2011] at quite a significant cost,” said Taylor. “It was something that we spoke to the council about and they're just happy that the venue is full of people once again.

Launched by Taylor and friend Daniel Cuffe in 2009, the Preston-headquartered firm staged Rod Stewart’s stadium tour earlier this year and also promotes events such as the Lytham Festival and Greenwich Music Time. It has also opened a London office in Shoreditch.

“The big development in London is we've started an arm of the company called Cuffe & Taylor Theatrical and we're going to be producing a major West End musical next year,” added Taylor.