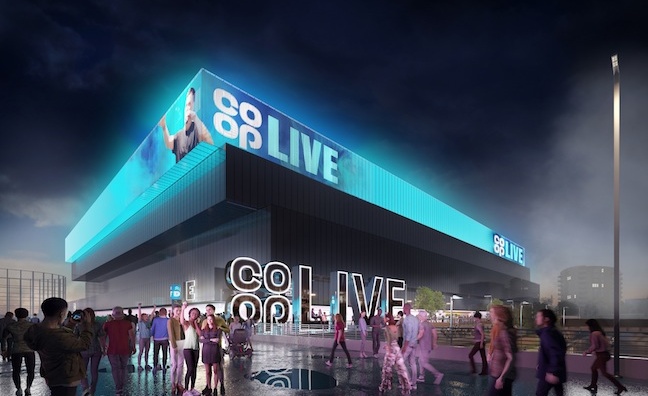 Oak View Group (OVG) has partnered with Co-op on the proposed new £350 million arena in Manchester.

Plans for the arena, named Co-op Live, were given the green light by Manchester City Council last week.

The 23,500-capacity arena at East Manchester's Etihad Campus is set to become the largest in the UK and provide competition for the existing Manchester Arena (recently renamed AO Arena), operated by rival ASM Global, which opened in 1995. OVG, founded by live industry heavyweights Tim Leiweke and Irving Azoff, hopes to host its first event in the new venue in 2023.

Our partnership goes way beyond a normal naming rights agreement

Leiweke said: “We’re delighted with this partnership and join together with the Co-op team to build the new world-class arena that Manchester deserves. Our shared vision with Co-op is what makes this partnership so special.

“Our partnership goes way beyond a normal naming rights agreement. The shared values will help define the ethos of the venue, including bold commitments on sustainability and community. I’ve said from the beginning of this project that this arena will be of Manchester, for Manchester and by Manchester, and this partnership with one of the city’s most iconic brands is a critical part of that. We can’t wait to work together to bring amazing live event experiences, in one of the world’s best arenas, to Manchester.”

Sam Piccione III, president, OVG International, said: “We started discussions with Co-op over a year ago, and knew from the very first meeting that they were the right partner for our new venue in Manchester. “We’ve worked hard together throughout the challenging recent months to bring the right deal together. Co-op is both one of the UK’s most recognisable brands and deeply embedded in the local community, so it’s a privilege to partner with them for the next 15 years.”

The move will create 3,350 constructions jobs, starting from November this year, and 1,000 roles and apprenticeships on completion of the venue. Around £1m a year will go to good causes across the UK – distributed by the Co-op Foundation - and the arena will be "at the forefront of Manchester’s zero carbon agenda and help to tackle food poverty via a zero-food waste initiative".

Manchester Arena operator ASM Global issued a statement underlining its disappointment with the council's decision to give the project the go-ahead, and said it was considering its position.

“We are, of course, wholly disappointed in [last week's] decision, which we feel completely negates the concerns of both ourselves and many key city centre stakeholders," it said. "These concerns are backed by compelling evidence that shows there is simply no market for a second major arena in Manchester. This decision will have a significantly adverse impact for our existing arena, and the wider city centre businesses and attractions it supports. Clear evidence has been presented on multiple occasions that demonstrates the application for an Eastlands Arena relies on flawed research, impossible market projections, is in defiance of national and local policy, and does not align with the adopted Core Strategy to support sustainable growth in the city. Why then has it been so readily approved?

“Fundamental questions remain as to whether this is truly the right choice for Manchester, particularly in the current climate. Despite the initial plans for the area, starting with the 2017 Eastlands Regeneration Framework, emphasising any proposals should complement the city centre offer, we firmly believe, and are supported in analysis from the likes of Charles River Associates, Oxford Economics and Grant Thornton, that this second arena will instead pull visitors, footfall and spend away from the city centre. It also places plans to redevelop and transform Manchester Arena – currently submitted for approval and supported by over 7,000 in Greater Manchester – in jeopardy. There is simply no business case to support a significant investment if the market is halved.

“We are considering our position, and will review all options to ensure the future of Manchester Arena, and our city centre economy, is secured, despite the pressures posed by the approval of this application.”