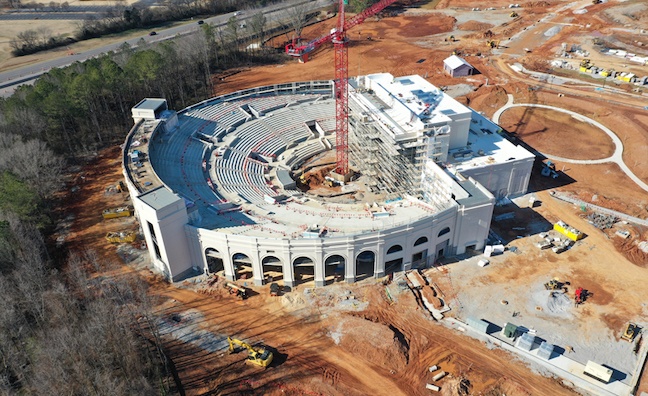 TVG Hospitality – a creator, developer and operator of music venues and hospitality offerings founded by Ben Lovett of Mumford & Sons – has today announced the closing of $50 million in new funding to expand its team and venue portfolio in the United Kingdom and across the United States.

Founded by Ben Lovett, along with his brother Greg Lovett, the former finance director at Soho House, TVG currently operates three venues in London with multiple venues under development in the United States, including the Orion Amphitheater in Huntsville [pictured], Alabama, opening in May 2022.

Speaking about the new funding, Ben Lovett said: “Our passion at TVG, our defining character, is a deep-rooted belief in the value of communal spaces, gathering places where we can be reminded of our common ground and all that makes us human. Music is the ultimate leveller—somewhere between melody and lyric is a truth that calls us away from our phones and out of our living rooms to stand together and sing together. The plans we have in mind are rooted in elevating these experiences surrounding live music. I am incredibly grateful for the investments from so many of our industry leaders. It further cements our belief that our new thinking is going to be game changing for artists, fans and communities alike.”

Irving Azoff, chairman/CEO, The Azoff Company and co-founder, Oak View Group, said: “We are thrilled to be working with TVG on this next chapter of their venues.”. “Ben and his team are approaching the venue space in exactly the right way—you have to put the artist and the fan at the centre of every thought process. That’s the key and TVG are both artists and fans whilst also knowing a thing or two about hospitality. We hope to support them on their mission in any way we can.”

Nat Zilkha, board member of TVG added: “Music venues have been an underinvested asset class for years and TVG is bringing to life a much-needed supply of world-class venues. Rather than attempting to compete in a mature music industry with entrenched players, TVG has created a way to partner with the industry and build for the future.”

TVG has also partnered with the City of Huntsville, Alabama on the 8000-cap Orion Amphitheater to be opened in May of 2022.

A press release stated that TVG will “will manage the amphitheatre and the in-bowl concessions, as well as operate a food village next to the amphitheater and another venue located in downtown Huntsville called Meridian Social Club at The Lumberyard opening this summer.”

TVG is also in development on numerous other projects across the US and UK, including in Washington DC, London, Nashville, Austin, Detroit, New York and Los Angeles.

Mike Luba, longtime partner and new investor said: “For more than a decade Don and I have been on all sorts of adventures with Ben and the band, so when Ben wanted to try and figure out how to build a new Amphitheater in Huntsville, of course we were game. What is happening at TVG across multiple venues is incredibly exciting and there is so much good that this crew of folks will accomplish together.”

In connection with the financing, TVG has also expanded its leadership team.

“We have purposefully built a leadership team with extensive experience across music, hospitality, real estate and finance. We are building our company like we create our venues, with intention, so that our assets and tvg become valuable and sustainable parts of each of the communities in which we operate,” said David Lovett.