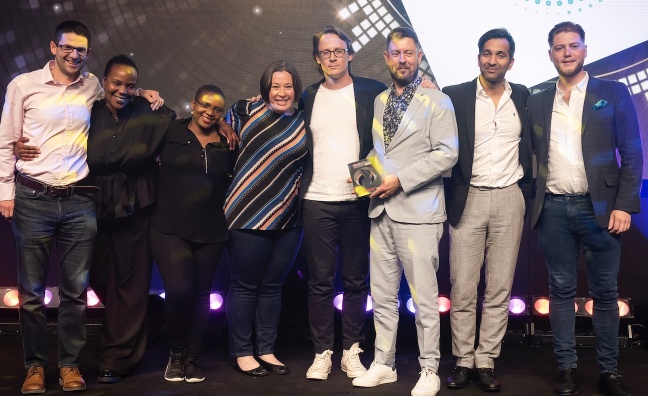 The O2's commercial director Adam Pearson has told Music Week that the venue will continue to put music fans and the industry at the forefront of its strategy as the live sector emerges from the Covid pandemic.

Pearson was speaking backstage at the Music Week Awards last month, when The O2 and AXS picked up the award for Live Music Innovation Of The Year for AXS Mobile ID, its new paperless ticketing system.

The executive (pictured above, fourth from right) and the team who worked on the technology were ecstatic in the wake of their win, which came after a torrid time for the live sector.

“I think we’ve probably won because of the work that went into coordinating all of the different component parts of the music industry in delivering something that is genuinely groundbreaking for the fan,” said Pearson.

The O2 developed its app in collaboration with Realife Tech. Customers can buy tickets from multiple retailers, including Ticketmaster, Eventim, Ticketzone, See Tickets and Gigantic.

The AEG-operated venue, which is celebrating its 15th anniversary this year, recently unveiled a raft of sustainability measures and its paperless ticketing system will play a key part in its drive to attain net zero status.

“We have made the entry system and the way you get tickets to The O2 infinitely easier across multiple ticket agents,” said Pearson. “Ultimately, when you do things that are good for the fan, people recognise that.”

The new technology launched in August 2021 as The O2 hosted two Gorillaz gigs for NHS and key workers, with tickets available exclusively via the app. The dates marked The O2’s first full capacity live events in 500 days, following the lifting of Covid restrictions.

In the run-up to the shows, Music Week spoke to Kilimanjaro Live CEO Stuart Galbraith, who suggested the shows would prove to be a line in the sand.

Pearson said the process was characterised by “nervousness” as The O2’s team worked towards the launch.

“Like with all things ticketing, it had its challenges leading up to the first night,” he said. “We were dealing with a pandemic period when no one knew what was happening in the live industry, so the work the team put in to get us through that and to overlay a technology integration involving all of those different parties [was great].”

Pearson said that his experience in the live business meant he was always confident.

“With the teams at The O2, AXS and across the industry, you never had anything but full faith because you just knew they were going to smash it,” he said.

Expanding further on how they were able to put the plan into action despite the pandemic, Pearson said uniting the live sector was crucial.

“The journey was complicated for sure, we were working with a range of stakeholders across the industry and it was about getting all of those people to talk to one another, talk to us and, all together, do something that was good for the fan,” he said.

With the process now firmly bedded in, Pearson reflected on its success: “We’ve removed the need for tickets to be posted out and all the stress that comes with that, everyone can buy their tickets online, resell them using AXS technology and get into the venue quickly and easily.”

Speaking to Music Week last July, The O2’s programming director Christian D'Acuña laid out the scale of the issues imposed by the pandemic.

Last July, The O2 had 87 performances confirmed for 2022. In a typical July, D'Acuña said the venue would have an average of 20 shows for the following year booked. And the venue’s calendar remains packed. It recently hosted multiple night stints from Billie Eilish and Queen + Adam Lambert, and Alanis Morrissette, Kings Of Leon and Haim are among the artists set to perform this summer.

Pearson said that he expects The O2 to play a key part in the live sector’s recovery from the pandemic.

“I think we’re still in an emerging state,” he said. “There’s an awful lot of positivity and excitement to be back out doing what we all love doing and to have fans in our building. The O2 is an absolute central hub and central part of [the recovery] and we’re delighted to have played our part in getting the live industry back on its feet.”

“There are lots of challenges at the moment, both in our industry and the world that we live in, we just hope that live music can give people something to look forward to,” he added. “The great recovery is definitely on.”

Catch up on all the winners from the 2022 Music Week Awards winners here.