The O2 is back! Kilimanjaro Live's Stuart Galbraith on the arena's return with Gorillaz 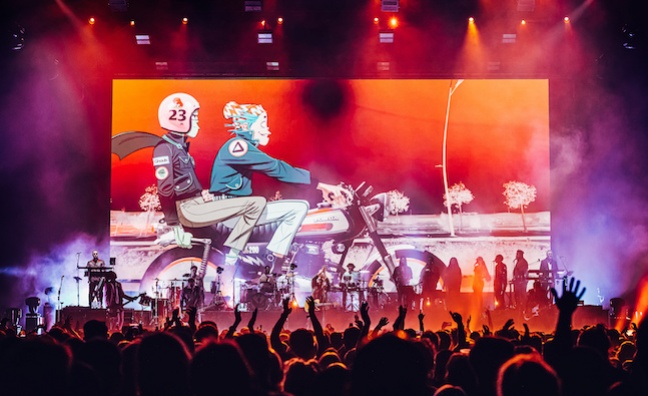 The O2 Arena is back in business.

The venue has staged a free show for NHS workers and their families by Gorillaz. The August 10 gig was the first public concert at the venue in 17 months, following a series of lockdowns and the subsequent easing of Covid restrictions on July 19.

“It was really a joint idea that came from Ian Huffam at X-ray, Damon [Albarn], ourselves at Kilimanjaro and The O2 as well,” Kilimanjaro Live CEO Stuart Galbraith told Music Week. “We all had similar thoughts at a similar point in time and then started speaking to each other. We thought it would be brilliant to be able to show our appreciation for everything that all of those people [working in the NHS] have done in the last year and a half.”

Kilimanjaro Live has staged some events this summer, including 5,000-capacity outdoor shows at Dreamland in Margate. But this is the biggest since the easing of restrictions last month.

“This is our first indoor, full arena show and obviously the first show back at The O2,” said Galbraith. “So we're very excited about it, very appreciative of the huge amount of work that has been put in by both the Kili’ team, the Gorillaz team and indeed The O2 team as well.

“We're all going to be going through the processes of entry protocols for the first time, in terms of vaccination passports or negative test results for not only everybody backstage, but obviously all of the audience as well.”

All ticket holders will need to present an NHS Covid Pass on entry to gain access to the venue, a measure which is currently discretionary for venues but which is set to become mandatory by the end of September.

Stuart Galbraith is confident that the venue will be able to handle the Covid Pass process.

“It's been very well publicised,” he said. “We have had the ability, obviously, to contact all of the ticket holders, because we’ve got email addresses for all of them. They've all been told exactly what it is that they need to do. I'm sure that we'll have some people on the door that haven't quite understood, but we've got plenty of staff and the venue has plenty of staff on hand who will be able to sort out any queries and issues.

“Even though it isn't going to be potentially mandatory until September, it is the right thing to do now because we're preparing for later in the year. And it's good to be able to give the audience confidence that everybody that's coming in, we know with a large degree of certainty, is Covid virus free. It's also something, I think, that will become much more normal in many aspects of life for the next couple of years.”

GORILLAZ ARE ABOUT TO HIT THE STAGE @TheO2 ???? pic.twitter.com/0nLEKzwObA

Gorillaz added the NHS workers show alongside the original scheduled date (August 11) - the full, public reopening of the venue with a sold-out, 17,000-capacity show.

As well as marking the reopening of the venue, it is the band’s first live performance with an audience in over two years. Robert Smith of The Cure was among the guest performers last night on Strange Timez. Popcaan guested on the performance of Saturnz Barz, while Peter Hook appeared for Aries (pictured).

“I think they're as big as ever,” said Galbraith, who noted that this week’s shows have effectively become a one-off production for The O2.

“It’s a bespoke production that has been put together just for this show because there were other shows planned in other European territories, most of which had to fall by the wayside,” he told Music Week. “The band have been really courageous in deciding to push on with these two shows.”

Gorillaz released their latest album, Song Machine, Season One - Strange Timez (Parlophone) in October. It peaked at No.2 and has sales to date of 38,744.

The shows this month by Gorillaz have, largely by chance, ended up as the reopening gigs at The O2. The initial date went on sale last October.

“Everything was looking good, we were coming out of high infection numbers in that period when we went on sale,” said Galbraith. “We had very good sales and we sold out within a matter of days. Never did we think that, come the following August, there would be some doubt over it.

“We're grateful that we ended up avoiding the lockdown periods. We’ve come after what was initially the June date [for reopening] and then the July date. As it is, we've turned out unexpectedly to be the first show back at The O2.

“We would much prefer to not be the first shows back. It would have been great if shows had been taking place there for a long period of time already. But as it is, we are the first two shows, and it is brilliant that we've been able to do this show specifically for the NHS and key workers. We’re very, very grateful for everything they've done, and very happy to see them all in the room really going for it.”

Other upcoming shows at The O2 include an NHS show by Liam Gallagher (August 17), Burna Boy (August 27) and Bring Me The Horizon (September 26), which is also promoted by Kilimanjaro.

While the BRITs did take place earlier this year at The O2 (albeit with reduced capacity of 4,500), Gorillaz was the first full-capacity, public artist concert since Halsey on March 8, 2020 and the first event since the Kisstory Blast Off! multi-artist production on March 11 featuring Nelly, Shaggy and Eve.

The arena hosted the Nitto ATP Finals behind closed doors in November 2020, and a performance by Pete Tong in December 2020, although it was only for a livestream audience at home.

Steve Sayer, VP & general manager at The O2, said: “This is such a big moment for us. Our first live show in over 500 days, with one of the UK’s best bands playing to an audience made up of NHS staff and their families. We have missed the fans and live performances so much, we couldn’t be more proud to reopen with this event and to welcome such a great audience.”

Subscribers can click here for our report on the 2020 touring logjam.