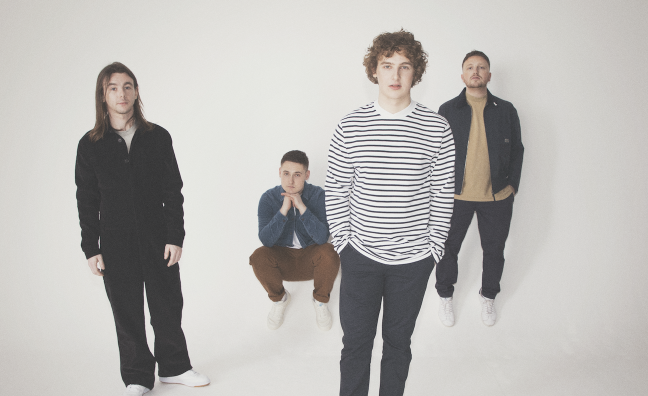 The band headed down from their base in Scotland to support The Libertines at one of several gigs being staged at the new venue, which was opened specifically to give fans the opportunity to see live music this summer. They were also booked to play Live Nation’s Drive-In series, which was cancelled due to restrictions.

“It was great to be back in front of people playing songs we’d been dying to play,” said Cochrane, whose band hit No.14 with their Mixtape EP in March and have been busy livestreaming throughout lockdown. “We were pretty skeptical going into it, as was everybody, about social distancing at gigs, but if anything I felt like people were engaging more with the music. It felt like there was a lot of focus on the stage, which I thought was pretty nice.”

The crowd is divided onto individual viewing platforms at the Arena, and Cochrane said the separation made for a new experience.

“It was odd because, when I perform, I sometimes get caught up picking out people in the audience and gauge how I’m doing by how they’re reacting,” said the singer. “But it was so much easier to hone in on people and judge how they were feeling about the music they were hearing. If anything, it was more intimate, which was quite nice, and surprising.”

The Snuts played two sets on the day and headliners The Libertines watched both from the side of stage, something Cochrane says is rare in indie circles.

“It’s one of the most nervous gigs I’ve ever done and I’m pretty nervous, I’m a real perfectionist,” he said. “There was a moment when I looked across at what looked like a seven foot pete Doherty just staring on and bobbing his head. I had a huge smile on my face, I had to compose myself and remember the words.”

Cochrane said the biggest takeaway from the show was a feeling of just how much people are missing live music.

“People are really missing live music, it’s a big part of their culture and what they like to do,” he said. “So the people who were there were diehards and were open-minded to the whole situation. There was a real understanding, people knew this was the only way that artists could play music and the only way they could see it. So there was a sentiment to it.”

Tipped heavily at the start of the year, The Snuts have been livestreaming throughout the pandemic, and sold more than 1,000 tickets to their recent Stay At Home show, broadcast from The Tall Ship in Glasgow. Watch out for much more on The Snuts in next week’s issue of Music Week.