'This is perfect': Mamma Mia! The Party producer talks teaming with The O2 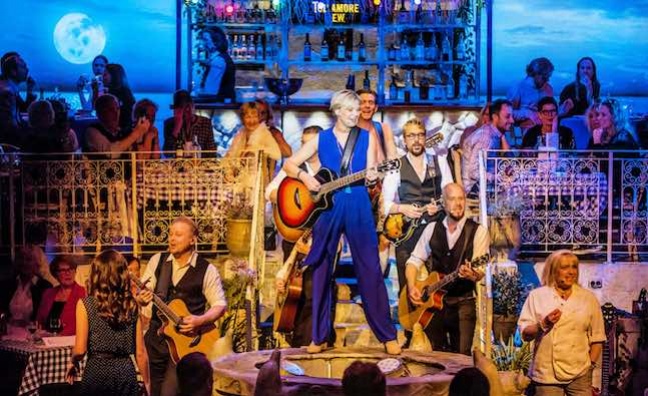 Mamma Mia! The Party opens for previews at The O2 today (August 29), following a hugely successful run in Sweden. The show is a spin-off of the musical and original movie, which had its own successful sequel and soundtrack.

As we report in the latest issue of Music Week, the original Stockholm production, created by ABBA’s Bjorn Ulvaeus, is entering its fifth year with bookings open for spring 2020.

The show’s producer, Ingrid Sutej, is hopeful of a long run at The O2, where the immersive theatrical and dining experience is staged in the former Matter, Proud2 and Building Six club venue. Here, she takes us inside the preparations for the big launch of Mamma Mia! The Party...

How’s the new version of the show going?

“It’s a new cast, more or less a new production. Watching a couple of the run-throughs, they were terrific. Both Bjorn and I are happy and excited. It’s going really very well. It’s a big space, which has been transfigured especially for this. It’s quite different to Stockholm with a script [by Sandy Toksvig]. It’s been a big job getting it all together. We’re really feeling quite good that it’s going to be a great show here in London. You are absolutely transported to Greece when you are in our venue.”

You were originally going to the Southbank, but changed location after complaints from residents. Are you happy with The O2 venue?

“I have quite an old association with The O2 because I was their director/VP of content development during the opening and for the first five years. So I know the venue well, I feel comfortable there and most of the people there are colleagues I worked with. They are so professional, AEG, they really help you put the [show] together very efficiently, quickly and professionally. I felt very comfortable going there. Having said that, they have never had anything like this there before. The actual club where it was before was not a great success story for them in that building – probably the only thing that wasn’t a great success story for them. So they welcomed it. We’ve done a great deal with CTS Eventim in Germany as our ticketing agents, they have been great partners as well.”

“People don’t realise when you look at the ticket price, it’s a top show with top sound, top lighting. It is a three-course meal by a very high-class caterer, and it’s a disco at the end. So it’s a club experience as well. If you want it, you can stay for that. Considering everything you get, I don’t think it is really expensive. That’s what it costs in London today. We’ve tried very hard to keep the prices as low as we possibly can. I hope that people will understand when they’ve seen it, as they certainly have in Stockholm, what a big experience it is in terms of food and entertainment.”

Is there a potential international audience for this London production?

“We haven’t started with the tourist market yet. At the moment most of the buyers have been mainly London, Greater London area and UK. But I think that it will have international reach. Obviously we have plans to go into other markets directly, and we are already quite well progressed in some other countries to follow London.”

Do you think there’s a growing opportunity for innovative productions that tap into an existing audience?

“I do actually, because there are so many different types of shows, but it’s not that easy to have new West End hits any more. At the O2, I was constantly thinking about new things we could do there in the round. One has just always got to look at new angles to attract people, and I think that this immersive concept is a good one. It’s not easy to find a venue and a space and concept like this – this is perfect.”

To read the Music Week story pick up the latest issue – or subscribers can click here. To subscribe and never miss a big industry story, click here.