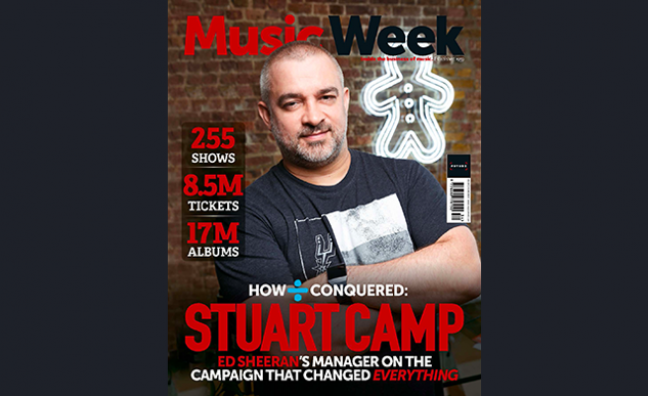 The new issue of Music Week is out now, as we welcome Ed Sheeran's manager Stuart Camp to the cover to mark the end of the highest-grossing tour of all time.

The Grumpy Old Management founder reflects on Sheeran's epic ÷ world tour, which concluded last night in Ipswich, and reveals what the future may hold for the world's biggest pop star.

In addition, Sheeran's live agent Jon Ollier of CAA and promoters Steve Tilley of Kilimanjaro Live, Dan Ealam of DHP Family and Simon Jones of AEG Presents share their memories of the ÷ trek, which also broke the attendance record for a single tour, welcoming more than 8.5 million fans across 255 shows worldwide.

In this week's Big Story, we look at the spate of weather-related festival cancellations over the summer season and speak to industry experts about the challenges involved. Also in news, we speak to Mamma Mia! The Party producer Ingrid Sutej ahead of the theatrical and dining experience's launch at The O2, while DJ Jax Jones discusses the upcoming release of his debut album.

Hitmakers sees US-based British songwriter Carmen Reece relives co-writing Craig David ft. Bastille's I Know You, which peaked in the Top 5 in 2017, and revered producer Daniel Lanois recalls his time with some of music's most seminal artists in The Aftershow.

Elsewhere, in a special report Music Week gathers some of vinyl's biggest players to find out where the beloved format goes next, amid reports of a slowdown in the sector.

Taking the Rising Star slot is Koyejo Oloko of Ko___Ol/Nepa/Sweetboy, BBC Radio's head of social media Jeremy Stone is our latest Tastemaker and indie rockers Dry Cleaning are showcased On The Radar.

The hook-up between Sky Sports and Labrinth is this week's Sync Story and pop hopeful Lily Moore is Making Waves.