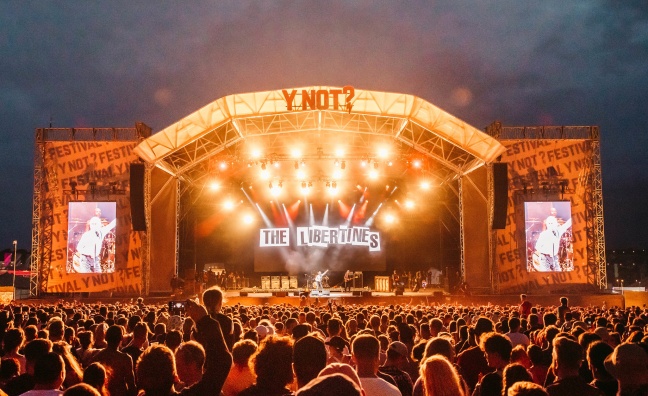 Y Not Festival has returned to its original management, Count Of Ten, three years after being acquired by media and entertainment giant Global.

The team will be headed up by operations manager Jason Oakley, whose association with the Peak District event stretches back to the mid 2000s, when it was founded by an old schoolfriend, Ralph Broadbent.

"Global have been looking to offload all of their music festivals so they offered Ralph Y Not Festival back," explained Oakley. "But Ralph had ownership of other events around the country and was subject to non-compete agreements, so he wasn't allowed to take it back. But luckily, he convinced them to offer it to me."

Oakley told Music Week he is planning a back to basics approach.

"I've taken it on to try and put on a successful event that's a bit more in line with what the event used to be," he said. "As the festival grew it began targeting a wider catchment area and lost its local feel. Y Not was always a little bit different because it was just a gang of mates who [organised] it, so hope to get back to that. It's going to feel a bit more authentic and a little less corporate."

Organisers have faced a baptism of fire in preparing for this year's festival, which takes place in Pikehall, Derbyshire from July 25-28. Headlined by Elbow, Two Door Cinema Club and Foals, it will also feature acts such as Franz Ferdinand, You Me At Six, Wolf Alice, Don Broco, Happy Mondays and Echo & The Bunnymen.

"It's been a tough one because we came into it quite late in the game," said Oakley. "But we've been working tirelessly for the last four weeks and we've got some great plans in place. We've got a lot of the old team back and a lot of the old suppliers in, so it's looking really solid at the minute."

Y Not Festival was founded by Broadbent in 2005, growing from a house party to a 25,000-plus capacity festival.

"I helped him build Y Not Festival from a house party and turn it into a very small music festival that was targeted at local people and became popular in the local area," said Oakley. "In 2011 he took me on full-time and from there my position grew to head of operations. Ralph took on more and more events and eventually we were running around eight all over the country."

Global entered the festival sector in 2015, acquiring a stake in Broadwick Live. It then expanded its portfolio in 2016, taking control of a host of events, including Y Not, but has since stepped away from the market, selling a number of festivals to James Barton's Superstruct Entertainment earlier this year.