'There are a lot of positive signs for guitar bands': Two Door Cinema Club talk False Alarm and Glastonbury 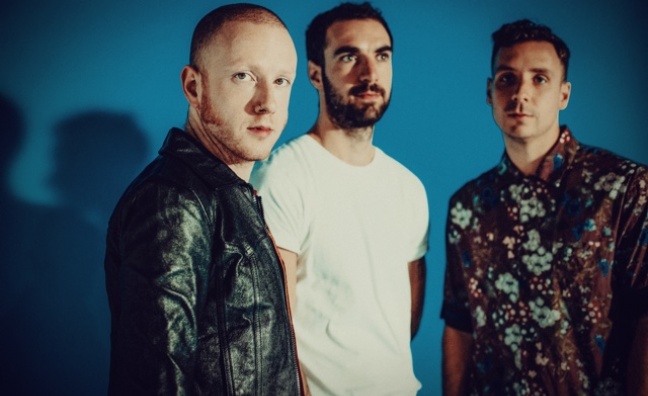 Two Door Cinema Club are chasing their first No.1 album in the run-up to their Glastonbury appearance this weekend.

The trio's fourth studio LP False Alarm, their first to be released via the JV between Prolifica Inc and PIAS, currently sits at No.3 in the midweeks on sales of 7,234, just over 3,000 copies behind Will Young's front-runner Lexicon, according to the Official Charts Company.

"[False Alarm] was a super fun album to make," bassist Kevin Baird told Music Week. "We were afforded the time to write and record periodically as we felt the urge, which was something we hadn't really done since our first album.

"It was fun to get back to writing and recording when it felt right. We worked with Jacknife Lee, who's a super inspirational producer and friend, so it was a nice experience and we're happy and proud of the album that we've put together."

We're confident in the staying power of this record. It feels like a marathon rather than a sprint these days

He added: "We're also confident in the staying power of this record. It feels like a marathon rather than a sprint these days, especially with bands in our lane, and we're never going to be able to compete with the way that more mainstream artists like Drake or Post Malone release music these days.

"Guitar bands are just not in the same lane when it comes to releasing albums and if we judge the success of an album based on week one sales then I think we're setting ourselves up to fail."

The band have landed a plum slot on Glastonbury's Other Stage this Friday evening, sandwiched between Snow Patrol and headliners Tame Impala.

"We're excited and humbled," said Baird. "It's probably the first time we'll play in something close to darkness on a major stage [at Glastonbury]. Glastonbury is the festival that is closest to our hearts."

Represented by Primary Talent’s Matt Bates, the band headline Tramlines, Y Not, Truck and Victorious festivals this summer and have a UK arena tour booked for October.

"Sometimes we feel like we're the only guitar band left at these major festivals," admitted Baird. "But seeing Truck Festival, which we're headlining, selling out; Y Not selling out; Tramlines selling out – these are really strong indicators that there are a lot of dedicated guitar music fans out there. We just need to shift our focus and our thinking.

"Sometimes it can feel a bit doom and gloom for guitar bands but there are a lot of positive signs, especially in the UK."