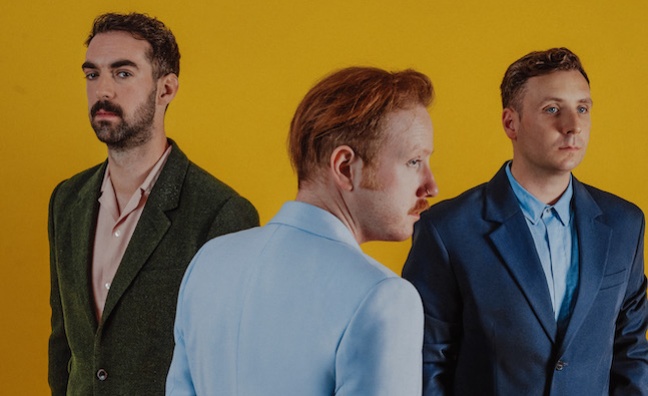 Two Door Cinema Club have taken a stand against the rush for week one chart sales by abandoning multi-format editions and outstore gigs.

The band have gone so far as destroying the masters to their new album, Keep On Smiling. Posting on social media, Two Door Cinema Club confirmed to fans that the vinyl would not be pressed again after the run of 5,000 copies for the world had sold out.

Keep On Smiling (Lower Third) will be released first digitally on September 2, followed by the vinyl LP on November 4. There will be no CD or cassette edition.

“I don't think their egos particularly needed a very high week one chart position,” said Colin Schaverien, co-founder of the Lower Third label and management arm Prolifica Inc. “So it was an interesting conversation, but essentially they don’t want to do that dance.

“They've managed to bank a huge amount of amazing music, it was more about how we strategically get that out into the market over a long elongated campaign, alongside the live campaign.”

Two Door Cinema Club have made the Top 5 with their last three albums. False Alarm peaked at No.5 in 2019 and has sales of 23,314 (including 11,987 physical copies), according to the Official Charts Company.

The label bosses believe that the vinyl edition of Keep On Smiling is set to be particularly prized by fans. The band filmed themselves in protective gear melting down the masters in a furnace.

We’ve had a lot of questions about the limited edition vinyl and if it will ever be re-pressed so to be super clear….it won’t EVER be available again on vinyl once these 5000 copies have gone. pic.twitter.com/Af8qUfo1k9

“You cannot ever repress it again,” said co-founder Stefano Anselmetti. “We thought it was a good marketing exercise, and it would add value to the vinyl  product.”

“It was much to the bemusement of our partners in North America, Glassnote, who are obviously wanting more traditional retail to be involved, but they can’t,” noted Schaverien

Lower Third, previously called Prolifica, is now in its fifth year in partnership with PIAS. The label roster also includes Maximo Park and Circa Waves, as well as emerging acts.

Schaverien described their streaming focus for Two Door Cinema Club’s fifth album as a “creative decision” that will open up new music drops throughout the campaign.

“But it’s also about the broader economics of having to chart a record these days,” he explained. “They didn't want to put a huge amount of their marketing spend into driving,essentially, multi-format D2C [sales].

“We could probably record another Two Door album for what we would have spent on digital marketing and the outstores - it's a significant amount of money.”

The band have 6.2 million monthly Spotify listeners, which has allowed them to pursue a streaming-first strategy with confidence. Resources can now be diverted to creating marketing assets to support the campaign.

“We will also expand on collaborations between artists,” said Anselmetti “It’s taking the band outside of the comfort zone as well, to really start working a bit more collaboratively and expanding the fanbase outside their traditional [audience].”

High week one placings followed by dramatic declines have become a regular feature of the weekly charts for physical-focused acts.

In January, The Wombats’ No.1 album Fix Yourself Not The World fell to No.96 in its second week. There have also been rapid descents for Top 3 physical releases by Don Broco (1-139 for the belated physical edition), Jamie Webster (3-140) and Frank Turner (1-72), among others.

In March, Sea Power’s No.4 LP Everything Was Forever disappeared from the Top 200 the following week. Maximo Park, a Lower Third act, fell precisely 100 places after narrowly missing No.1 the prior week.

“We've been more guilty of this than probably anyone else in terms of our bands,” admitted Schaverien. “So we're slightly contradicting ourselves. But until the chart, in terms of its weighting, is recalibrated, then more bands and independent labels need to look at the economics of releasing records.”

Schaverien also questioned the impact on the environment and sustainability.

“There are some campaigns where the multi-formatting is just becoming slightly obscene,” he added. “There's a huge amount of cassettes, CDs and plastic.”

Outstore gig album bundles through record shops have become a key driver of week one sales for many bands, particularly independent acts. But, in pursuit of a chart placing, the events are costly to put on and potentially deplete ticket sales for touring later in the campaign.

“It's a double negative, and the only positive is that it allows you to negate some of the chart [pattern] in terms of it leaning more towards pop and hip-hop, streaming artists,” explained Schaverien.

However, the Lower Third boss praised record stores for their support, such as Banquet in Kingston.

“Banquet and those guys have been fantastic partners, and they actually have a niche and in terms of the audience it’s an A3 corridor, so it doesn't really take tickets out of your London sales,” said Schaverien. “But there are definitely other places, regionally, where you're taking money out of your hard ticket audience.”

When it comes to those existing retail and distribution partners, Schaverien said that “transparency” had been vital.

“We've been really honest with them upfront about why we're doing it,” he said. “We obviously put an awful lot of records out independently through the label and as a management company, and we've got really good relationships via our partners at Integral [PIAS].”

See the latest edition of Music Week for an expanded version of this article, including insights from D2C specialists Townsend on week one sales and BPI boss Geoff Taylor, who addresses how the Official Charts Company measures streaming and physical album sales as the industry shifts to a consumption model.