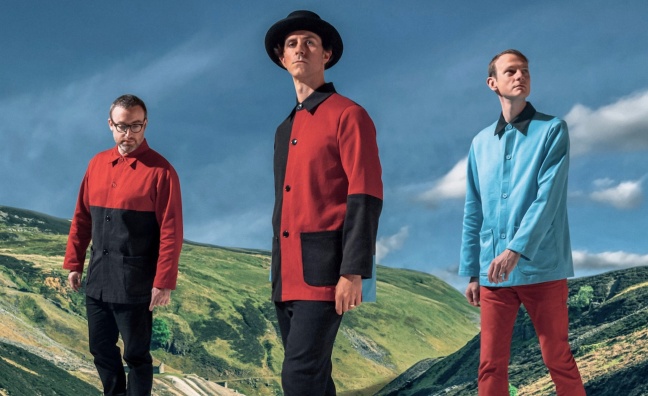 Maximo Park singer Paul Smith has told Music Week that his band are on a mission to “elevate ordinary life into something memorable and moving” following the release of their new record Nature Always Wins.

According to the latest midweek numbers, the band’s seventh album could be on course to become their first ever UK No.1. Maximo Park formed in Newcastle around the turn of the millennium and released their debut album A Certain Trigger via Warp in 2005. Peaking at No.15, it has gone on to become a modern indie staple and has 241,437 sales to date, according to the Official Charts Company.

They followed it with two more records for Warp, hitting No.2 with Our Earthly Pleasures (203,843 sales) in 2007 and No.6 with Quicken The Heart (49,313 sales) in 2009. They moved to V2 for The National Health in 2012, and released Too Much Information and Risk To Exist through their own Daylighting imprint.

Nature Always Wins is the runaway leader at the top of the charts this week, with the vast majority of its sales from physical copies. Released through Prolifica Management’s label JV with PIAS – which has enjoyed success with Two Door Cinema Club and Circa Waves in recent years – it’s the latest example of Maximo Park’s enduring appeal.

The Wombats and The Kooks have seen similar success of late, too, prompting nostalgia among those who followed the wave of early noughties indie bands eulogised in the pages of the NME. The question of ‘indie landfill’ continues to cause debate, and Paul Smith moved to distance his band from the subject, telling Music Week it doesn’t merit serious attention.

And why should it, when his band - completed by guitarist and keyboard player Duncan Lloyd and drummer Tom English - could be heading for a No.1 album?

Nature Always wins was recorded with Atlanta-based producer Ben Allen, with its sound shaped initially by the departure of keys player Lukas Wooler and later the coronavirus pandemic. Parenthood was an overwhelming influence on the record, which was also informed by incidents such as the Grenfell Tower fire of 2017 and the Bataclan attacks in Paris where Nick Alexander, who used to sell merch for the band, lost his life.

Here, Smith reflects on Maximo Park’s new music, what he’s learned from 20 years in the industry, indie landfill and more…

What do you want the new record to say about Maximo Park in 2021?

“That we're making fresh and exciting music even though it's our seventh album. We're still curious about what we can achieve together and we love writing songs that, hopefully, connect with the listener. The songs are derived from personal experience, and, as always, we hope to elevate ordinary life into something memorable and moving.”

You reference different societal issues and incidents in the lyrics, do you feel music can have an impact and help enact change at this time?

“To some extent, but we realise we're just musicians and the effect will be more cumulative than anything else, if other people out there are talking about the same topics. When I hear good songs that touch on similar socially driven subject matter, I feel some sort of solidarity, and that's all we can hope for, too. The songs are subjects that I'm interested in as a lyricist, otherwise they won't be interesting to anyone else, but I don't want to sound preachy - there's always an emotional angle. The songs need to be balanced and be enjoyable to listen to in whatever way – they are pop songs after all!”

Circumstances changed significantly for you ahead of and while making the record, how did that impact it?

“Well, with Lukas, our keyboard player emigrating to Australia, we knew our sound would be refreshed in some way, whatever happened. That's one of the reasons we approached Ben Allen to produce – he's a multi-instrumentalist as well as a sonic explorer! We asked him to come up to Newcastle for a weekend and go through some songs while he was in England, which went really well. We expected to fly out to Atlanta to record shortly afterwards, but the pandemic hit and we ended up doing it remotely. It was a tad disappointing to say the least not to have that adventure, but he made the slightly protracted process feel very seamless, looking back. We ended up relying on the demos more than we intended, but that enhanced the strength of the songs, ultimately. In terms of the lyrics, I became a dad five years ago, and wanted to see if I could include some of the intense feelings that I've experienced, but without being clichéd or sentimental. Parenthood became a springboard to talk about all sorts of other topics.”

I don't think the term indie landfill relates to us

How is the set-up with Prolifica and PIAS working for you?

“It's been great. There are no go-betweens in terms of label and management, so even if it's something we don't particularly want to hear, we get our information straight from the horse's mouth, so to speak! The closeness between us means that they also know what kind of a band we are – fairly single-minded and creatively driven compared to more commercially driven artists. PIAS have been brilliant so far, very flexible and responsive when Prolifica need anything. We've worked with them before as a band, and myself as a solo artist, so it's nice to rekindle that relationship.”

What have you learned about the music industry since you’ve been going – it’s changed quite a lot over the years?

“I have no idea! To be honest, I try to stay focused on my part within the band, as a lot of the 'industry' side feels out of my control. Clearly, things have become much more digital, and streaming has become dominant, which is not necessarily our strong suit, being a band who value the artefact, as do our audience. All I can do is make sure the music is as good as it can be, and allow other people to try and sell it on our behalf. One of our strengths is as a live band, which is something that can't be replicated, so that feels like a real constant in the industry, until this last year. I'm quite present on social media, which takes more time than I'd like, but we have tried to adapt where necessary in order to share the music, and to allow people to see what kind of people we are, and broadcast our artistic intentions. It's fun, too! As a band, we feel lucky to know each other, and to still share a collective enthusiasm about the music we make. Being very equal, in terms of individual voices in the band, has helped us endure. I feel like we've made a strong, consistent body of work, and we're still friends, which helps massively.”

Finally, the indie landfill question has come up again recently. What do you make of the term and what are your feelings on the generation of bands you came up with?

“I don't think anyone should take it very seriously! But since you ask, I don't think it relates to us, as you might expect me to say. It's true that there were lots of terrible, often quite 'laddish', guitar-y bands around at the same time as we started, so I can't blame anyone for coining the term. I think anyone who listens closely to our idiosyncratic lyrics and arrangements would have the good sense not to associate us with that term. You can slag us off for many things, but not being a conservative-minded, unadventurous band…”