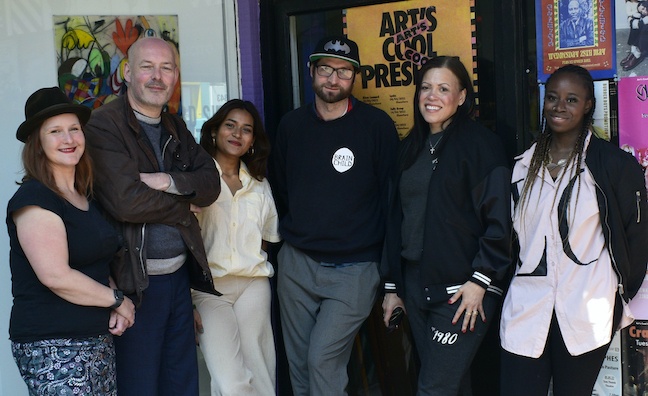 The MMF today (September 27) celebrates three decades since its launch with a special summit in London.

Taking place at London's Koko, from 12-5pm, the event will explore the past, present and future of music management. Drawn from the archives of Music Week, a specially-created exhibition of the MMF from 1992 to 2022 will highlight the organisation’s work over 30 years.

The event will also host the launch of the MMF's new book, The Essentials Of Music Management. In addition, there will be presentations on the latest tech innovations, including hologram touring, new audio formats, NFTs, digital pressings, navigating Web3, and building digital communities. Robert Swerdlow of Starwood Management has stepped in for a management keynote, as Iain Watt is no longer able to participate.

Here, CEO Annabella Coldrick looks back at the organisation’s origins and its key role in the modern music industry…

Whenever a new or cutting-edge technology gets introduced to the world, its implementation can often prove challenging, unpredictable and controversial. And in many cases, the tangible impacts are not felt until many years later, or in ways that their inventors might not have initially considered.

Thirty years ago, on September 13, 1992, over 300 managers were gathering at Manchester’s In The City conference for the inaugural meeting of the Music Managers Forum. Motivated by a widely perceived lack of transparency and fairness in the wider music industry, their unhappiness had peaked with proposed contractual terms for a new incoming format, the Digital Compact Cassette (DCC).

As well as a lack of consultation surrounding the DCC’s introduction, they were particularly incensed after comments by BPI chairman Maurice Oberstein that the costs of its implementation should be shouldered by a reduction in royalty rates for their artists and songwriter clients. 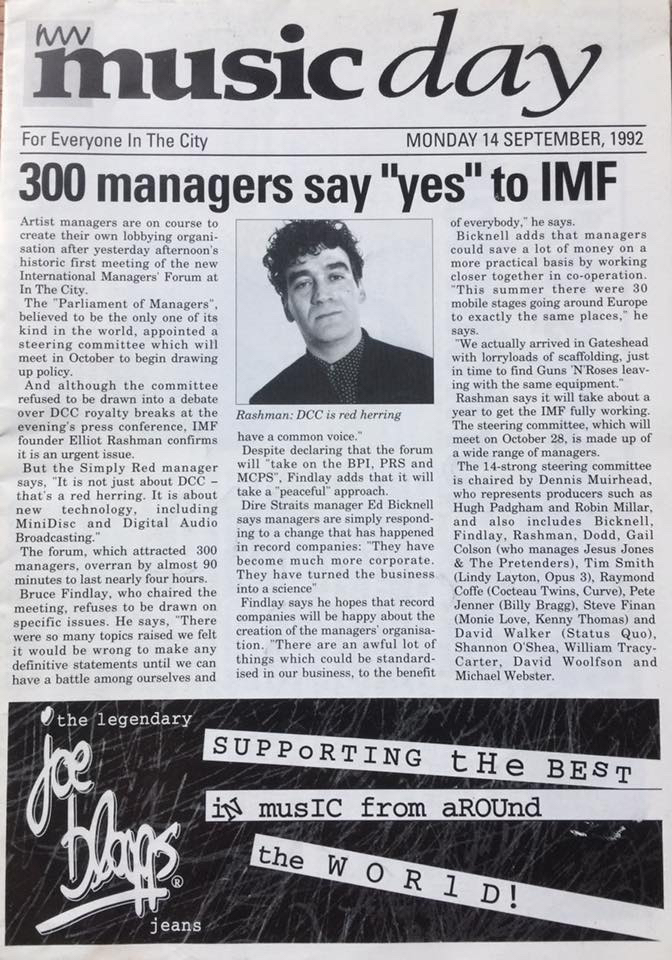 The resulting furore made front page news on Music Week, and, from that initial spark the MMF went from strength to strength. To the point where we now represent almost 1,300 members - ranging from established businesses representing global superstars through to individuals taking their first initial steps.

Fast forward to today, it would be easy to think everything and nothing has changed.

In terms of technology, while the DCC became a footnote, it was the CD that superseded vinyl and the cassette tape as the music fan’s format of choice, fuelling huge profits for record labels as a result. However, eventually, it was the ingenuity of Tim Berners-Lee, also about to be unleashed in 1992, that would ultimately have the greatest impact.

Thirty years ago, with the nascent World Wide Web just being made public, there were reportedly only 10 websites in existence. There are now almost two billion. Two thirds of the world’s population are connected to the internet - increasingly via mobile devices. Music is available to everyone, everywhere and at the touch of a button. To reiterate again, the course of change is hard to predict.

On the other hand, and as highlighted by the ongoing debates about streaming economics, the discontent raised by managers in 1992 are still very much in evidence. For the vast majority of MMF members - not to mention the artists, songwriters and producers they represent - the licensing structures of digital music still require reform and reconstruction.

In too many cases, contractual terms have not kept pace with changing forms of consumption

In too many cases, contractual terms have not kept pace with changing forms of consumption - to the detriment of the artists and music makers who signed them.

Yes, we are making progress on this front. There have been some welcome improvements as a result of lobbying by the MMF and other creator representatives, notably the public commitments from Sony, Warner and Universal to disregard legacy recoupment debts from pre-2000. But further change remains a work in progress. The MMF’s Dissecting The Digital Dollar initiative continues to shine a light on all these aspects of the business, including the long overdue structural reforms that would ensure songwriters receive a greater share of the pie.

Similarly, these debates and discussions don’t stand still. The forward march of technology continues, and artists and music entrepreneurs are currently faced by another brave new world of uncertainty, with palpable excitement building around Web3, NFTs, DAOs, the metaverse, Dolby Atmos and other “decentralised” innovations and formats.

Just as it was 30 years ago, it remains vitally important that managers can remain on top of these innovations - no matter how fantastical they might seem - and aim to understand how they might benefit and grow the business of their clients.

In addition to our lobbying and advocacy work, the MMF continues to play a vital role here too, working with our growing range of associate members to ensure that managers are being supported with access to information, expertise and training - as well as outrolling our acclaimed Accelerator Programme, now entering its fifth year thanks to YouTube Music.

Aspects of an artist’s career that may seem immaterial or niche - such as image rights - could become absolutely pivotal in a future popularised by livestreamed in-game concerts or holographic ‘real life’ events. Retaining contractual ownership and protection of those rights today might potentially reap dividends 10 or 20 years down the line.

Consequently, it felt fitting that we should celebrate the MMF’s 30th anniversary by hosting a summit that puts a firm focus on all these areas of exciting uncertainty - enabling our community to interact with some of the most inspiring and forward-thinking managers, businesses and thinkers. Excitingly, we will also be launching a new book, The Essentials of Music Management, which replaces our former Music Management Bible and means we have an MMF text relevant for the digital age. As our founders knew, knowledge is power and can help level the playing field between creators and corporations.

In many senses, it feels like taking things full circle.

The MMF remains indebted to those who stood up in Manchester back in 1992, and we continue to pursue the same goals and aspirations, and for those reasons it’s vital we embrace whatever new technologies come into our path, and help ensure tomorrow’s industry is fairer and more equitable than the one we participate in today.

Subscribers can read our feature on the 25th anniversary of the MMF with key players in the organisation’s evolution.