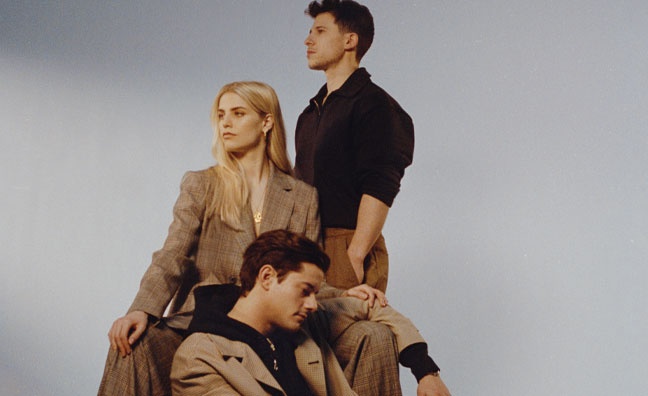 Tap Music have revealed the latest addition to their star-studded roster: London Grammar.

“We are so happy and proud to be working with London Grammar,” said Tap's Ed Millett. “They are incredible artists with a great vision and Hannah [Reid] has one of the most amazing voices in music today. We look forward to helping them achieve all their goals and more.”

“London Grammar are a truly unique band and we are all thrilled to have them join the Tap family,” added Tony Beard. “We’ve been fans for years and are excited to help them on the next phase of their career.”

London Grammar, who were previously represented by September Management, released their third album, Californian Soil, on April 16, 2021, via Ministry Of Sound – the record debuted at No.1 and has since sold 81,835 copies to date according to Official Charts Company data. Their 2013 debut If You Want is double platinum on 780,381 while its 2017 follow-up, No.1 album Truth Is A Beautiful Thing stands on 247,174.

Having already completed a successful UK tour in support of the album last year, the group are due for a headline tour of Australia in May, will play European festivals across the summer, headline South Facing at Crystal Palace Bowl July 29, and support Coldplay at 10 European stadium gigs, culminating in three Wembley Stadium shows.

Music Week understands the group to be working on a new album, due for release next year.

Earlier this week, it was revealed that Ben Mawson and Ed Millett have been nominated for Manager Of The Year at the Music Week Awards 2022 – the pair having previously won the honour back-to-back in 2020 and 2021.

Lana Del Rey took to Instagram to praise Mawson and Millett on their nomination, writing: “Congrats to Ben & Ed and Tap. I sang in bars for eight years before I met Ben and [later] Ed. I could've done that forever but I wanted a little bit more, and what I got was something bigger than I could've expected. Some artists do it on their own but with us and everyone we've worked with, it truly has been a team effort. I love and owe them the [world]. Through good and bad times they have been fiercely protctive, loyal and loving... My hope for every artist is that they get to work with people like them and in return these guys deserve that love and gratitude back. 13 years after meeting them - my admiration for them remains undimmed... looking forward to many more years and tears with them by my side! Wherever each of our journeys take us. Congrats on your nominations boys."

Currently, Tap Music are working on their ongoing campaign to find the UK's next Eurovision winner. Back in October 2021, Tap revealed their plan and called on the music industry to share experienced live performers for their consideration.

“For many years, we’ve witnessed the United Kingdom not doing as well as we would’ve liked, when pop music is something we usually excel at,” said Tap’s Ben Mawson at the time. “The simple fact is it’s time to show what we can do and the wonderful musical talent we have - ultimately we can’t blame politics”.

Last month, Tap gave an update on the process of finalising their shortlist, which has left them with “an incredible mixture of both established, emerging and brand new talent” to choose from.

London Grammar, meanwhile, are also up for a Music Week Award this year for Music & Brand partnership for their collaboration with Calm.

You can revisit our latest in depth chat with Ben Mawson and Ed Millett here.