'There have been massive ups and downs': Rebecca Boulton & Andy Robinson on 20 years of managing New Order 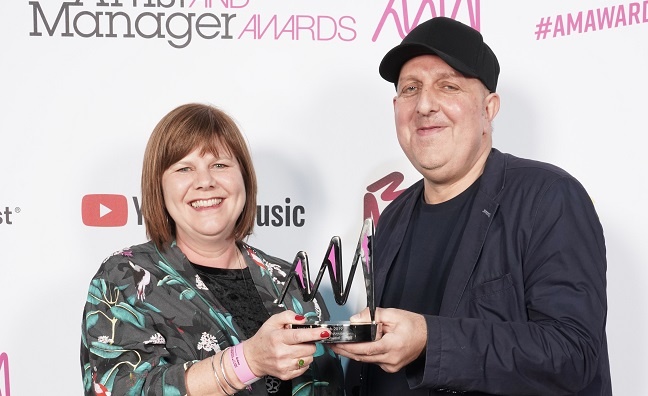 New Order managers Rebecca Boulton and Andy Robinson have reflected on their 20 years with the legendary band in a new interview with Music Week.

The Prime Management duo, who succeeded the late Rob Gretton in the role in 1999, received the coveted Managers' Manager Award at this month's Artist & Manager Awards in recognition of their success with the band over the past two decades.

The band's most recent studio LP was 2015's acclaimed Music Complete (81,361 sales) via Mute Records, although they released a live album, ∑(No,12k,Lg,17Mif), earlier this year.

“I’m very pleased by how New Order are currently positioned,” said Robinson, speaking in the latest issue of Music Week. “They’re in a good place, well respected and well known. It’s amazing that after that long in the music industry the band can produce such a great record, it just shows what a fantastic band they are.”

Boulton was previously Gretton's assistant, while Robinson was New Order's keyboard tech and tour manager. The pair also represent the interests of Bernard Sumner, Stephen Morris and Debbie Curtis in the managing of Joy Division.

“We’d worked for Rob for a long time and we had both moved into managerial roles, so we were covering most aspects of the business [already],” said Robinson. “We just thought, ‘Let’s put ourselves forward for the role’. Amazingly, the band accepted.”

“There was a new [record] deal about to be put in place and they were about to start work on a new album, so it felt like a new chapter anyway,” added Boulton. “It did seem like the music industry was changing at that point in time."

The band resumed touring in 2011 with Bad Lieutenant’s Tom Chapman on bass following the departure of Peter Hook. Hook sued his former bandmates in 2015 before a settlement was reached two years later.

"I tried to look back on it positively, in as much as I try to think about things that happen as opportunities to grow professionally or personally in some way, and mostly I’ve done that," said Boulton. "And I learned a lot! I had to. I learned about the legal system and about myself and my capacity for certain types of knowledge.”

Looking back on her time co-managing the band, she added: "There have been massive ups and downs, obviously. But I feel like what we’ve achieved is helping the band with their goal to keep moving forward while, at the same time, looking back and making sure the catalogue is done responsibly and carefully, that reissues are done properly and that they’re something they can all be proud of.”

Click here to read the full interview with Boulton and Robinson.