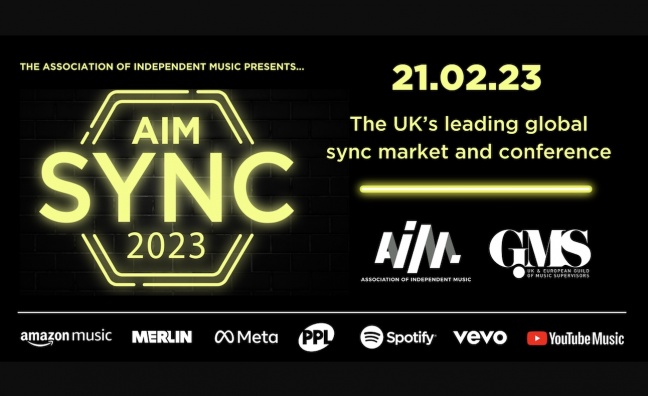 The Association of Independent Music (AIM) has unveiled the line-up for AIM Sync 2023, the global sync conference and marketplace.

The event, which brings together the independent music community with music supervisors in film, gaming, TV, advertising and brands, will include three concurrent livestreams featuring expert-led panels and workshops.

The market overview, which has become an annual staple of the conference, will provide insights from HotHouse Music, Too Young and Beggars Group, who will share their perspectives on developments across the global sync and brands landscape. Further topics on the day will include Creating Successful Long-Term Brand Partnerships and Bespoke Composition in Sync: Tips and Strategies for Independent Rights-Holders & Music Supervisors.

Case studies will unpack strategy around the soundtrack and music identity of Netflix’s hit drama Top Boy, which has championed high-profile syncs from independent artists Dave, Jorja Smith, Central Cee and Flohio, among others.

Additionally, the team behind Alfie Templeman’s virtual Mellow Moon Minecraft festival will discuss how it worked and how the innovation around the event powered Templeman’s 2022 album launch.

Listening sessions will give attendees a chance to receive feedback on their music from leading music supervisors who have placed music for global brands including Burberry, PlayStation, Apple and FIFA, as well as hit shows The Crown and Killing Eve. Delegates are also able to sign up to one-to-one meetings and open networking sessions throughout the day.

The event will include the 2023 AIM Sync Awards, which celebrate the year’s most innovative syncs in independent music and the teams behind them. Nominations are open for the two award categories —  Music Supervisor Of The Year and Independent Sync Of The Year.

Last year’s Music Supervisor Of The Year award went to Eyeliner Music’s Emmy-nominated MD Catherine Grieves for her work on the international hit series Killing Eve. Independent Sync Of The Year was awarded to the team at Young (Beggars Group) for their placement of Two Weeks by FKA Twigs in Burberry’s Hero Fragrance campaign.

Tickets for AIM Sync are available now, with discounted prices for members and friends of AIM, as well as various other trade organisations.

Gee Davy, COO at AIM, said: “Sync licensing and brand partnerships have seen significant innovation over the last few years, with streaming TV, in-game and the start of Web 3.0 opportunities adding to the mix. These innovations alter traditional deal structures as well as creating new revenue streams for creators and the businesses and teams who invest in and work with them, so it’s vital to keep up to date. Sync continues to be an important source of income as well as an effective tool for artists to reach new audiences so we designed AIM Sync to help professionals understand, participate in and capitalise on the sync and brand partnership opportunities available today.”

David McGinnis, MD of Mute Song, added: “AIM Sync is the very best UK forum for learning about sync marketing and licensing and for making connections in the sync world. No conference or speaker will assure you sync placements but if you have extraordinary music to market then AIM Sync can help you on your mission."