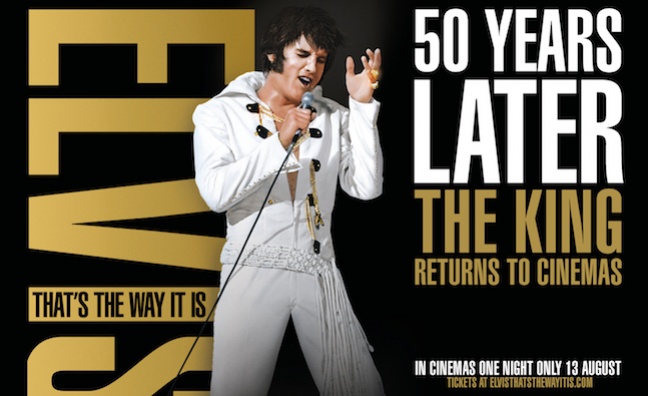 UK cinemas are finally back in business – and so is event cinema specialist Trafalgar Releasing. After the relaxing of coronavirus restrictions, the 50th anniversary, one-night-only release of Elvis: That’s The Way It Is shot to the No.1 spot at the UK box office.

The re-released classic 1970 documentary/concert film debuted in 260 UK cinemas on Thursday (August 13), taking over £94,000 in box office takings, making it No.1 for the day. According to Trafalgar, that also makes it the UK’s biggest popular music concert release of 2020.

It was Trafalgar’s first release since UK cinemas were allowed to reopen on July 4, and shows the appetite for concert experiences remains high, despite live music’s lengthy Covid-19 hiatus.

“We are pleased to see one of the world’s most successful recording artists return to No.1 with Elvis: That's The Way It Is, 50 years after its initial release,” said Marc Allenby, CEO of Trafalgar Releasing. “The attendance numbers show the continued appetite from fans to come together and celebrate the musicians they love, demonstrating further opportunities for music to thrive in cinemas.”

The movie also played in over 200 cinemas internationally, and pulled in the highest per-cinema average take of any film in Australia.

Directed by Denis Saunders, and filmed mainly in Las Vegas, That’s The Way It Is followed Presley as he made his return to live music, following the similarly legendary ’68 Comeback Special concert/TV show that rebooted his career. It includes performances of many of Elvis’ biggest songs, including Love Me Tender, Blue Suede Shoes, Heartbreak Hotel and Suspicious Minds.