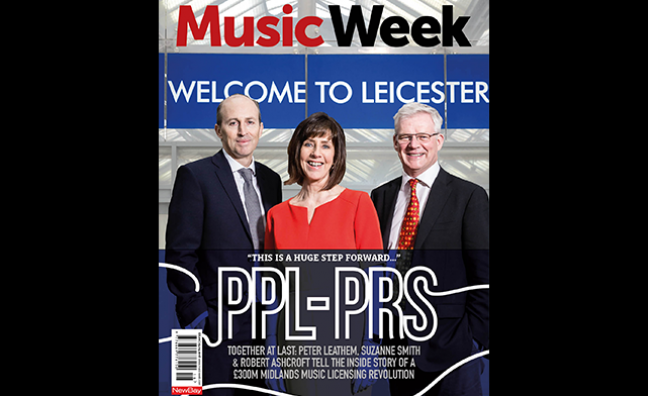 The new edition of Music Week brings with it one of the biggest music business stories of recent times: the coming together of PPL and PRS.

Photographed on location and interviewed together inside are cover stars Peter Leathem, PPL CEO, PRS For Music CEO Robert Ashcroft and managing director of their new joint venture, Suzanne Smith.

The union means a business worth almost £300 million, and represents a new dawn for the UK music industry. Music Week has been a fly on the wall throughout the process that led to the grand unveiling of PPL-PRS in Leicester, and we tagged along to sit down with the trio behind it all.

Also shaking things up in the biz in 2018 are the team behind the soundtrack for The Greatest Showman. In a special report, we tell the story of the soundtrack that just won’t stop selling, with contributions from an array of top executives.

Before long, Arctic Monkeys will be looking to take over the album charts with upcoming sixth album, Tranquility Base Hotel & Casino Tour. That record is the subject of this week’s Big Story, as the industry predicts big things indeed for the Sheffield band.

Alongside team Monkeys in the news section are huge stories from IMPEL and Dice.

Elsewhere in a jam-packed issue, we talk to BBC Music boss Bob Shennan ahead of his keynote appearance at MUSEXPO, while we pick out the unmissable panels at this year’s bash.

Ahead of this week’s Music Week Awards, we catch up with Nathan Clark from Leeds’ Brudenell Social Club, the inaugural winner of the Grassroots Venue: Spirit Of The Scene category last year.

Also helping us count down to the industry’s favourite night out of the year is Lauren Laverne, who will be our host with the most for the second year running. This week, the BBC Radio 6 Music DJ takes on The Aftershow.

Following the recent onset of their reissue series, Eurythmics’ Dave Stewart holds court about UK No.1 smash There Must Be An Angel (Playing With My Heart) in Hitmakers.

We delve into Cuckoolander’s neon pop in On The Radar, and introduce Lauren Auder in Making Waves. Paloma Faith’s massive hook up with Skoda is this week’s Sync Story.