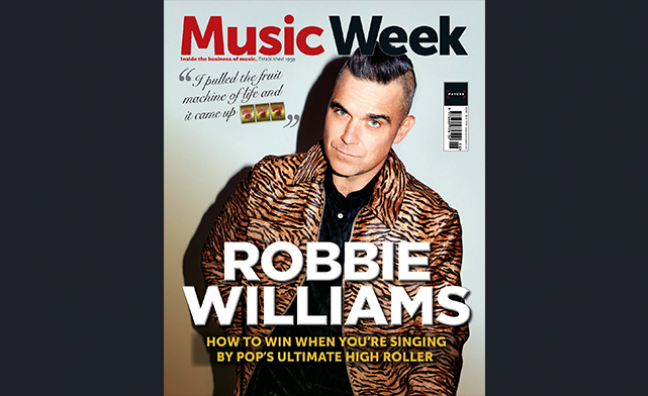 The new issue of Music Week is out now, and we are thrilled to welcome pop superstar Robbie Williams to the cover.

Ahead of the imminent release of his first Christmas album, Williams reflects on his incredible first 30 years in the business, including his famous £80 million record deal with EMI and record-breaking reunion with Take That, and looks forward to an exciting new chapter. There are also contributions from IE:Music's Tim Clark and Michael Loney, Columbia's Manish Arora and Sony Music's Chris Briggs.

This week's Big Story is the return of Coldplay, as Parlophone co-presidents Mark Mitchell and Nick Burgess reveal a follow-up to the band's new album Everyday Life is already in the pipeline.

Also, in the wake of last month's Music Week Women In Music Awards, we profile this year's 12 inductees to the Roll Of Honour, sponsored by Jack Radio, which celebrates female execs across the industry.

Elsewhere, the latest British exec to make the jump across the pond, Warner Chappell CEO and co-chair Guy Moot discusses his vision, new signings, new appointments and competing with his past achievements at Sony/ATV in a wide-ranging interview.

And in a special report on the legal sector, we speak to top lawyers to find out more about the essential services they provide to the music industry.

In Hitmakers, Black Box's Daniele Davoli revisits the trio's controversial 1989 chart-topper Ride On Time, which has just been celebrated with a 30th anniversary remix, while Foo Fighters drummer Taylor Hawkins takes on The Aftershow.

In addition, Sync Story examines the partnership between Renault and Rahel Debebe-Dessalegne on the Oasis classic Wonderwall, while Nottingham band Do Nothing are Making Waves.

Alongside all that, there’s all the very latest news, charts and analysis.

The issue is available in all good UK newsagents now. To secure your copy, please email Rachael Hampton on rachael.hampton@futurenet.com. To subscribe to Music Week and never miss a music biz story, click here.