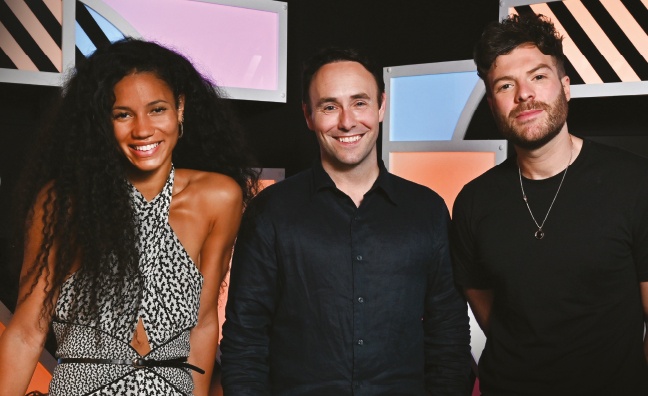 BBC Radio 1 head Aled Hadyn Jones and presenters Vick Hope and Jordan North have told Music Week why the iconic station will always be the home of breaking talent.

Hadyn Jones, who recently marked two years since succeeding Ben Cooper (now of Bauer) in the hot seat, paired the Northern duo of Hope and North to co-host the Drivetime show 12 months ago.

Speaking in the latest issue of Music Week, all parties agreed that providing a platform for emerging artists remained the core purpose of Radio 1.

“It’s literally what we’re here to do,” said Haydn Jones. “Whether that’s new music, new artists or new presenters, there are so many examples of us doing that, which has been so essential in the last couple of years through the pandemic. We’ve been really powering the music industry and had lots of new talent coming through.

“Whereas certain streaming sites are great at giving you songs you might want to hear on repeat, what we can do is give you an artist’s journey and more context to who they are and what they’re about."

Newcastle-born Hope, who arrived at the station in 2020 after stints at MTV, ITV, Channel 4 and Capital FM, said: “We’re really into championing new artists like The Snuts, Self Esteem or Koffee. When we play them, the text messages go wild and it makes me so happy because it means there’s a demand for it.”

“I always try and get behind bands," added Burnley native North, who officially joined Radio 1 in 2018 as host of Radio 1’s Greatest Hits on Sunday. "I’m just waiting for the new indie rock revival.”

Harry Styles has been a great artist for this generation

The trio also discussed Radio 1's role in the rise to superstardom of Harry Styles. The station was central to the roll out of his No.1 album Harry’s House, while the singer also headlined the station’s Big Weekend in Coventry in May and played tracks from the new record in the Live Lounge.

“I will never be able to forget the image at Big Weekend of all of these young teenage girls and boys clutching each other, their faces tilted up to the sky, singing every single word. It was just pure euphoria,” said Hope. “For a lot of them, it will have been their first time at a festival. There’s been this bottleneck of 15 to 25-year-olds who have not been able to go for a couple of years. So even if it wasn’t the first time, it felt like the first time and Harry was the soundtrack to that. He’s been a great artist for this generation.”

North said: “He’s probably the biggest artist in the UK right now and our audience loves him. It works both ways – he gets Radio 1 and he’s always up for doing interviews and getting involved with features. I think he’s always been a big fan.”

Haydn Jones noted the station's relationship with Styles stretched back more than a decade.

“In the One Direction era, we were there to support, but they were famously an X Factor act so I can’t quite claim that we broke them,” he added. "But when it comes to solo projects, the amount of time Harry spent with us recently was really special.”

Hadyn Jones' leadership received the ultimate vote of confidence from the music industry in May when Radio 1 was named Radio Station Of The Year at the Music Week Awards 2022. While Radio 1 dipped 2.6% on the prior quarter to 7.475m in the RAJARs, it maintained its status as the No.1 station for listeners aged 15-29 (the station's preferred ratings measurement counts younger listeners who aren’t covered in the main RAJAR figures).

“[RAJAR] is a measurement, but it’s not the only measurement,” Haydn Jones told Music Week. “The audience that I really care about is the 15 to 24-year-olds and what they think Radio 1 should be. The new generation of presenters know young people so well, which is making my job easier because they’re able to feed back to me what needs to be met.”

“At a time when attention spans are getting shorter and shorter – and there’s more competition for listeners’ time – to [achieve figures] that we haven’t seen in over 10 years shows that we’re getting it right with that young audience,” said Hadyn Jones. “Radio 1 contributes four million listeners to the BBC that they don’t get from anywhere else and I’m very proud of that stat. That shows how powerful Radio 1 is.”

The former Chris Moyles Show producer's decision to up Greg James' Breakfast Show to five days a week has also continued to be vindicated, with figures rising slightly to 4.135m in the latest RAJARs for Q2 2022.

“When you’ve got Greg James on the Breakfast Show, it’s almost criminal not to give him five days,” said Hadyn Jones. “I’d give him seven days if he would do it; he is brilliant. It’s not really about numbers, it’s about him being the shop window for Radio 1 and I could not be prouder. When he plays a BBC Introducing track, there are around four to five million people hearing it, he’s just huge and he does it with such passion.”

Read the full interview here from this month's edition of Music Week.