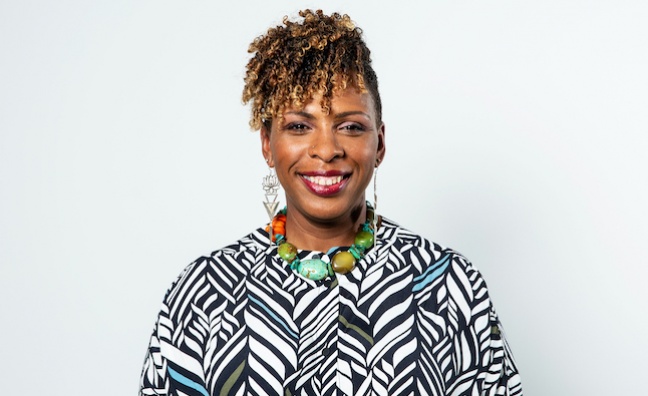 PRS For Music has partnered with PRS Foundation to sponsor the New Artist Award at today’s Music Week Women in Music Awards.

Here, Michelle Escoffery, president of the PRS Members’ Council and Women In Music Roll Of Honour inductee, gives an insight into what PRS for Music is doing behind the scenes to support music creators…

PRS for Music is pleased to be teaming up with PRS Foundation to support the New Artist Award at this year’s Music Week Women in Music Awards, celebrating the outstanding achievements of women at the beginning of their music careers.

Ensuring gifted music creators from all backgrounds are encouraged to pursue a career in the arts is an ethos that is vitally important to both PRS for Music and PRS Foundation, which is why we actively engage and invest in initiatives like the Women in Music Awards, among others.

It is invigorating to be part of the music industry at a time when women are being rightfully celebrated and recognised for their achievements, and we are seeing a slow-but-steady shift in the gender balance both on stage and in the workplace.

Our latest figures show that more women are registering with PRS as professional songwriters and composers each year. Nearly 2,000 joined in 2020 and of those, over half were under the age of 30. Highlighting creativity at a young age, this also shows a strong understanding of the worth of their art. Although the proportion of women PRS writer members is still low in comparison to the total at less than 20 per cent, this gradual progression is a promising sign for the future.

During an eighteen months like no other, where all musicians have faced the toughest of challenges, there has been a tower of support from women-led initiatives and programmes for the songwriting community. There is clearly still more work to do to balance the gender gap across the board, but PRS for Music, alongside several industry partners, is playing its part.

Momentum built over the last five years by Girls I Rate, a movement which focusses on equality for young women in music, continued into Spring 2021 when it launched the #GETHEARD Future Hitmaker Competition in partnership with PRS for Music and PRS Foundation. Since 2016, we have collaborated with Grammy-nominated songwriter and Girls I Rate founder, Carla Marie Williams, to give aspiring musicians the opportunity to receive industry support, PRS Foundation funding and UK airplay via Girls I Rate’s radio show on The Beat London 103.6FM.

Earlier this year in Belfast, Oh Yeah Music Centre hosted Mothers in Music, a twelve-week songwriting, recording and performance programme, designed for 17 musicians with caring responsibilities. To truly tackle and improve gender disparity in our industry, we have to address and break down these barriers that continue to prevent women music creators from progressing in their careers.

PRS for Music took great pride in supporting this programme, which brought together established songwriters such as Katie Melua and Stina Tweeddale of Honeyblood, to share their experiences and assist these women at a pivotal point in their careers, whilst acknowledging their caring duties and any associated prejudices. I was honoured to host a songwriting masterclass with these incredibly talented mothers and was most inspired by their high quality of artistic expression and collaborative efforts to make music that means something.

The confidence, sense of community, and increased professionalism the programme has enabled gives us hope for the future and is something PRS for Music hopes to build on further with Oh Yeah, and throughout our wider network of women songwriters and composers across the UK.

Be your own boss, climb your own ladder

Music creators lead busy lives. According to the Musicians’ Union, 47% of musicians have taken on jobs outside the music industry during the pandemic. Utilising online platforms in the pandemic to reach our community, across the UK and internationally, has been a positive step forward in our educational activity.

Earlier in the year, PRS for Music’s educational outreach team collaborated with Women Connect, a femxle forward collective, to host a series on how to navigate the music industry. The webinars, designed to inform and empower, brought industry professionals straight into people’s living rooms and kitchens – or wherever they may have been throughout lockdown.

More recently, PRS for Music joined forces with Birmingham-based organisation, GIRL GRIND UK and its founder, NAMYWA for a series of exclusive workshops. Aimed at women, girls and non-binary songwriters, composers, and artists, the sessions focused on how attendees could advance their careers in the music industry. PRS Foundation funded singer-songwriter, Cariss Auburn, and co-creator of Mamas in Music, Mary Leay attended, discussing what creators need to know in today’s complex world of music while passionately helping and inspiring others in the industry, including addressing the needs of one of the most underrepresented demographics in the music industry – mothers.

Delivering excellent core services and support to PRS members as they forge their own unique paths is one of the cornerstones of what we do. Through attending independent events at grassroots level including Dot to Dot, Liverpool Sound City, Wild Paths Festival and Focus Wales, to speaking with presenters across the BBC Music Introducing network and our own Instagram How to LIVE series, we hope to inspire the next wave of women hitmakers and gamechangers.

By championing women in every corner of the industry, we are actively choosing to challenge gender-based stereotypes. The whole business, including those behind the scenes, need to reflect and promote the vibrant diversity of our treasured music creators. M Magazine’s special digital editions throughout the past year for Black History Month, International Women’s Day and Pride allowed PRS for Music to offer a space and platform to those redefining what it means to be a woman in the music business, and support the women bold enough to enter it.

When you win, we all win

Victories for women at UK award ceremonies this year have been incredibly encouraging to see. Female artists dominated the 2021 BRITs. Dua Lipa won two BRITs including Mastercard British Album of the Year for the chart-topping Future Nostalgia, while Little Mix made history as the first female group to win British Group.

Arlo Parks won this year’s Hyundai Mercury Prize for the album Collapsed In Sunbeams. Eight of this year’s Mercury Prize nominees received PRS Foundation funding to help develop their careers, and it is promising to see yet another music creator rising to the top of their game after receiving this support.

Through these works of great ambition and creativity, PRS members’ collective songwriting expertise has been acknowledged as some of the finest the world has to offer.

Continuing our partnership with Music Week’s Women in Music Awards gives us all an opportunity to celebrate those leading the charge. We hope that seeing brilliant women acknowledged in this forum will inspire the next generation to flourish and propel us forward as an industry.