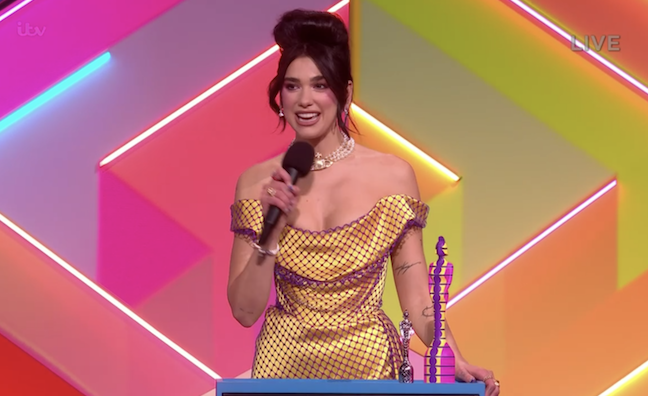 Female artists dominated the 2021 BRITs at The O2.

With the exception of the British Single category, female artists won in all eligible categories this year.

Future Nostalgia has sold 363,995 copies, according to the Official Charts Company, and can now expect a significant BRITs boost after triumphing in the coveted album category.

The show was live on ITV and featured a 4,000-strong audience of key workers who weren’t required to socially distance or wear masks, as part of the government’s Events Research Programme.

Following two previous nominations, Little Mix won British Group at the third attempt this time. They also made history as the first female group to win the category.

“It’s not easy being a female in the UK music industry,” said Leigh-Anne Pinnock, as the trio dedicated their win to previously unsuccessful category contenders the Spice Girls, All Saints, Sugababes and Girls Aloud.

Little Mix thanked RCA execs including president David Dollimore, along with Simon Forbes and A&R exec Joe Iddison, plus management at Modest including Richard Griffiths and Harry Magee. Leigh-Anne Pinnock also praised their “amazing promo team… who have been with us since day one”, including Simon Jones and Wolfie, as well as Confetti co-writers and producers Camille “Kamille” Purcell, Maegan Cottone, MNEK and TMS.

Arlo Parks, a Q1 success with her debut Collapsed In Sunbeams (Transgressive/PIAS), won for Breakthrough Artist. She was the sole independent artist to win on the night.

J Hus triumphed in the Male Solo Artist category, while Harry Styles’ Watermelon Sugar (Columbia) won for British Single With Mastercard. A US No.1 single, Watermelon Sugar peaked at No.4 in the UK and has 1,330,682 sales.

The Weeknd, who performed during the ceremony, won International Male Solo Artist.

The double win for Dua Lipa means that Warner Records have the most BRITs wins this year with three awards (including Rising Star winner Griff). Polydor had two wins for international acts Billie Eilish (International Female Solo Artist) and UK-signed Haim, who took the International Group category at the third attempt.

“The UK was the first place to ever embrace us in the entire world,” said Este Haim. “For that, honestly, we will be forever grateful.”

Overall, the spoils were evenly divided between the majors. Universal Music won four awards (including the Global Icon category which wasn’t voted for by the Academy), Sony Music won three and Warner Music won three.

Breakthrough Artist in association with TikTok

British Single with Mastercard (The top ten identified by chart eligible sales success then voted for by The Academy, Supported by Capital FM)