Harry Styles and all the UK winners at the 2021 Grammys 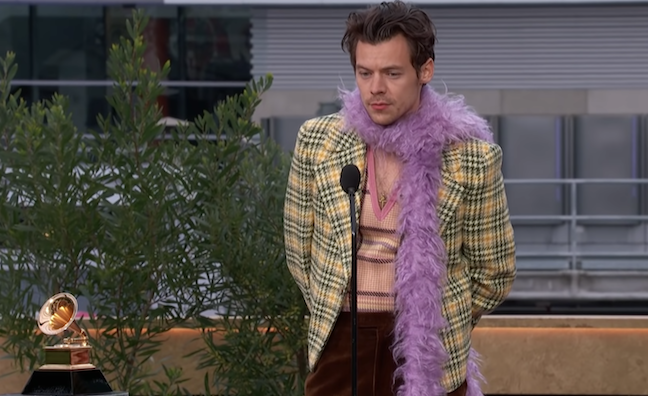 UK artists had high hopes at the Grammys, including Dua Lipa with six nominations.

But this year’s ceremony belonged to US acts, including Taylor Swift, Billie Eilish and HER, who triumphed in the three main categories.

"As an artist, I believe it's my job to reflect the times, and it's been such a difficult time," she said. "So I wanted to uplift, encourage, celebrate all of the beautiful black queens and kings that continue to inspire me and inspire the world".

The winners of the 63rd Grammys were announced at the hybrid event featuring pre-recorded online performances and acceptance speeches in person at a small, socially distanced gathering of masked nominees at the outdoor ceremony staged at the LA Convention Center.

Taylor Swift became the first female artist ever to win Album Of The Year three times after collecting the award for Folklore.

Billie Eilish’s Everything I Wanted was named Record Of The Year, while Megan Thee Stallion was named Best New Artist.

HER won Song Of The Year for I Can’t Breathe. The song quotes the words of George Floyd, whose death in police custody led to global protests about racism.

HER (Gabriella Wilson) said she never imagined "that my fear and my pain would turn into impact".

In his acceptance speech, Harry Styles thanked his co-writers Thomas Hull (Kid Harpoon), Mitch Rowland and Tyler Johnson, as well as Sony Music boss Rob Stringer, his label Columbia and manager Jeffrey Azoff “who has always nudged me to be better and never pushed me.”

The other UK winner was Jacob Collier, who won Best Arrangement, Instruments and Vocals for He Won’t Hold You. It means he is the first British artist to win Grammys for each of his first four albums.

Jacob Collier said: “Thank you so much to Rapsody for being a stupendous part of this song and bringing a beautiful poetic nature. This is an incredibly exciting time to be an artist and I’m super thrilled to accept this award.”

Geoff Taylor, chief executive BPI, BRIT Awards and Mercury Prize, said: “Last night’s British success at the Grammy Awards shows once again that music made here in the UK is as popular as ever with fans worldwide. One in 10 streams globally are by UK artists, but the competition is fiercer than ever, and it requires a bold new partnership between industry and Government to maintain our global leadership in music. Many congratulations to our deserved winners.”

The show also highlighted the struggle of music venues during the pandemic. Staff from New York's Apollo Theater and LA's Troubador presented some of the awards.

Click here to read our Hitmaker feature on Watermelon Sugar.