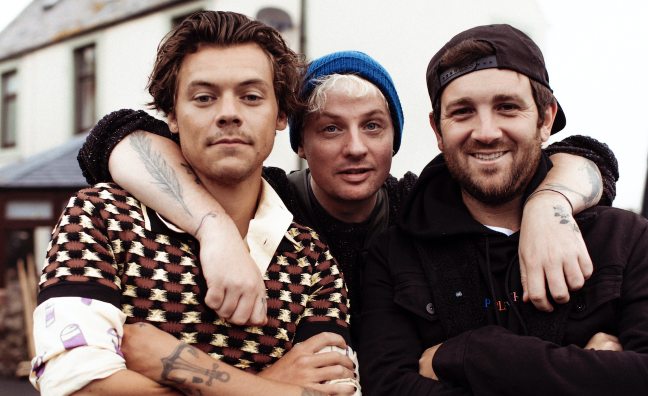 Jeffrey Azoff has told Music Week that the “calming effect” Tom Hull has on people is at the heart of his songwriting success as Kid Harpoon.

Writer and producer Hull is Azoff’s only such client, and the pair started working together after they became friends around the time Azoff moved from being a live agent to management.

“Anyone who’s spent time with him knows he’s just the greatest guy, I honestly think it’s part of what makes him such a good songwriter and producer,” Azoff told Music Week. “He’s such a good person that you’re immediately disarmed around him, no matter who you are. You get a sense of comfort and respect right away. He’s got a calming effect on anybody he’s around.”

Watermelon Sugar and Adore You led the charge for Fine Line last year, as the album became a defining record of 2020, despite coming out in December 2019. Indeed, last week, the album reached a new peak in the UK albums chart.

Azoff stressed the importance of recognising the work of songwriters and producers and told Music Week that, “A big part of my mission going forward is to be fiercely protective over songwriters and intellectual property, specifically”.

With manager Azoff and Hull, friendship has blossomed into a successful working relationship that revolves around a “less is more” strategy. Here, we talk to Azoff about what makes Kid Harpoon so special…

What first attracted to you Tom’s songwriting?

“I was a huge fan of Tom as an artist. I’ve always known of him. Obviously, his songwriting catalogue speaks for itself. I was blown away and the more you get to know him you find out it isn’t an accident, he’s just phenomenal at what he does.”

Did he reach a new level in 2020 after Fine Line’s success?

“I hope so. I think Tom would be the first to tell you that he and Harry, and Tyler too, just work really well together and have a really nice groove. He’s definitely found something.”

Has his schedule got more packed?

“Actually the opposite. Alongside his raw talent, when we started working with him, one of the things we mentioned as a strategy was to book less, which is counterintuitive for a lot of people. It means more time to spend with the music after the fact, or to spend preparing before, keeping the right balance. When we started he was booked solid and one of the keys has been just giving him some time. That’s been a big difference. It’s not for everyone, a lot of people would prefer just to keep going, but for him, keeping a balanced diary has been really important. He appreciates it, he’s also a family man, his wife Jenny and two kids are as incredible as he is, so that peace of mind for him is really important.”

“Musically, Harry and Tom have connected on such a deep level. Tom does really well when he can properly spend some time with the artists and get to know them and who they are and what really matters to them. Also, it’s identifying how he fits into their puzzle. Not every session is the same, every artist brings different perspectives and skillsets. So it’s figuring out his role, it’s not always the same in every room.”

Where does he fit into the songwriting landscape?

“He’s created his own lane. What he does and how he works is with an old school mentality and there are a lot of people who are intrigued by that.”

Are lots of big pop names going to be asking to work with him now?

“I certainly hope so. But one of the things that always impresses me so much is that he only wants to work on things that he genuinely thinks he can make a difference to and is excited about. A lot of the time, you can put two potential sessions in front of him and he’s not always going to take the bigger name or what would come with the bigger cheque, he really picks and chooses the music he loves and music he thinks he can make a difference to. I respect that so much.”

How do you reflect on the success of Fine Line?

Why do you think the singles connected in they way they have?

“Watermelon Sugar? Because it’s just really good! They just nailed that. It’s nice. It was inescapable for a bit here in the States. I’ll tell you, the second I heard Adore You it moved me. I got very excited about that one.”

What’s your strategy when it comes to managing Tom?

“We have such a nice working relationship because he’s the only producer I manage. I bring a little bit of a different perspective to what he does. I don’t have a traditional production management company. Giving him a little bit more time, things like that have been really helpful. And then because I don’t manage a lot of producers, maybe part of it is I just don’t know any better and we just stumbled into something really nice. Going forward, our strategy is pretty simple, it’s just to pursue and pick projects that he’s really passionate about and give him the time and space to get the best out of these people he’s lucky enough to be in a room with.”

Do your ideas match up most of the time?

“They definitely do and what’s nice is, working with a friend, when our ideas don’t match up, it’s really easy to have the conversation. So if there’s a session that I think he should do but he doesn’t, it’s easier for us to argue and land on what we hope is the right answer, because we’re such good friends. And it just makes it fun. Jenny is super involved too, and Tommy Bruce in my office. We have a really nice group of people, we work as a committee.”

What can he do for mainstream pop music? Can he change the way it sounds?

“I know his mindset is to go into sessions and give people the space to be as creative as they can. If that ends up taking them in a different direction creatively I think he’ll support it. But his ultimate goal is, in my opinion, to give people enough space to really be creative and take some risks.”

Subscribers can read our interview with Tom Hull, Jeffrey Azoff and Mike McCormack in full here.