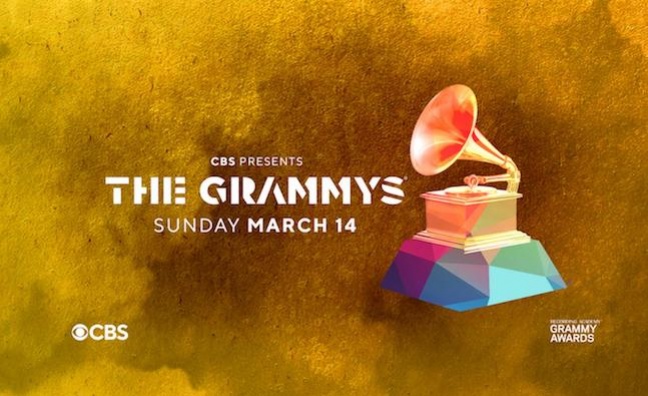 Who’s ready for the Grammys?

Hosted by Trevor Noah, the 63rd edition of the awards takes place on Sunday night (March 14) at the Los Angeles Convention Centre. It was pushed back from January because of the pandemic and there will be no audience.

Dua Lipa is the biggest hope for UK glory, thanks to the global success of her Future Nostalgia campaign. Dua Lipa has six nominations, including the main categories of Album Of The Year (Future Nostalgia), Song Of The Year and Record Of The Year (Don’t Start Now). As a former winner, she was on hand to announce some of the nominees last year.

Future Nostalgia (Warner Records) was the biggest album of 2020 released that year in the UK (265,042 sales – Official Charts Company). Music Week can reveal that its consistent streaming performance means it’s the No.4 album for the year to date (a further 42,674 sales).

With the album now platinum, Warner Music’s team are primed for a Grammys boost.

“There's a lot more in the tank on that project,” said Derek Allen, SVP, commercial at Warner Music. “There’s more new music [The Moonlight Edition] and two global award ceremonies, the BRITs and Grammys, which we're hoping that she'll perform well in. We know that has a positive impact on consumption.”

Future Nostalgia was famously released at the point of the first UK lockdown, after Dua Lipa and her teams at Tap Music and Warner pushed ahead despite the uncertainty.

“A lot of records weren't released or were held back because of the pandemic, for obvious reasons, so it was a brave decision – but the right decision,” said Allen. “It’s paid dividends, and it will continue to do so when we get through the Grammys and the BRITs.”

Harry Styles missed out on the big categories at the Grammys, but he’s up for three awards (including Best Pop Solo Performance for Watermelon Sugar and Best Music Video for Adore You) and will be peforming on the night.

According to OCC data, Fine Line (Columbia) is the No.2 album for the year to date with sales of 43,735 (total sales since its release in December 2019 are 406,813). Styles’ album is currently behind his label mates Foo Fighters, whose Medicine At Midnight is the top seller so far this year on 58,414.

However, Styles has streaming momentum (82.5% of Fine Line’s sales this year are from streams) and the Grammys coverage and social media amplification seems set to deliver a further lift for the album.

“He consolidated his position as a worldwide superstar,” said Charles Wood, Sony Music UK’s VP of market planning and media, who spoke to Music Week for our 2020 analysis feature.

With streaming in some weeks accounting for more than 85% of Fine Line’s ‘sales’, it’s a record that’s set for a strong performance in 2021 despite being released in late 2019.

“It's different from a purchase model, because people are keeping on listening to the album,” said Wood. “I’m sure it’s going to keep going across the year, there's no sign of it going away yet.”

Polydor is having continued streaming success this year with Pop Smoke and his debut album, Shoot For The Stars Aim For The Moon, which was a posthumous No.1. With 43,320 sales (97.8% from streams) in 2021, Pop Smoke is narrowly behind Harry Styles in the album rankings so far this year in third place.

Surprisingly, there’s just the one Grammy nod for Pop Smoke – Dior is up for Best Rap Performance. But the late US rapper is clearly still growing and the record is heading towards platinum status (265,408 sales) in the UK.

“It’s really quite phenomenal, Pop Smoke left such a mark on the world – and here in the UK massively – that I believe his legacy will continue to grow every year,” said Jade Bradshaw, head of marketing at Polydor. “Shoot For The Stars Aim For The Moon is simply a fantastic body of work – the fact it has re-entered the UK Top 10 album chart this year is testament to that. Noise around the Grammys will be a reminder to all of Pop’s fans, old and new, just how special an artist he was and for him to win an award would be incredible.

“There is, of course, still music of his being released too, which will continue to tell the story. Most recently we’ve released AP, which is taken from the Boogie film sound track – Pop Smoke stars in the film for his acting debut.”

Polydor also has Haim, who are directly signed to the UK label, in the running for the Grammys and performing during the ceremony. The LA-based band are up for the coveted Album Of The Year with Women In Music Pt III and Best Rock Performance for The Steps.

The No.1 album has sales to date of 42,229 and is primed for a Grammys-inspired surge.

“Haim’s third album Women In Music Pt III was universally heralded as their best work by both critics and fans when it came out and went to No.1 in the UK last summer,” said Polydor marketing director Stephen Hallowes. “The album appeared in almost every album of the year list for 2020 and ended up at No.8 in the overall BBC aggregated list.

“The Album Of The Year nomination at the Grammys only goes to cement it as a classic album and is history-making in that they are the first all-female rock band to be nominated in that category. In addition, Radio 1 added the new version of Gasoline featuring Taylor Swift to their playlist, with Absolute playlisting the original and 6 Music playlisting the new version of 3AM featuring Thundercat. These are the sixth and seventh songs from the album respectively to be playlisted at UK radio over the last 18 months.”

Haim will be competing in the album category with Black Pumas, who have three nominations at the Grammys. The US act’s self-titled LP (13,411 sales) with PIAS is ripe for wider discovery in the UK.

“We are thrilled that Black Pumas are performing on the Grammys this year,” said manager Ryan Matteson of Ten Atoms. “The acknowledgment of the band, their album and the anthem that Colors has become is truly a monumental milestone for the band. The Grammys hold a worldwide audience and I look forward to watching the reactions resonate beyond the States and continue to help expand the footprint of Black Pumas in the UK. We believe the Grammys will unlock larger venues and opportunities as the audience continues to expand after their landmark performance.”

Finally, Decca have high hopes for UK artist Jacob Collier, who already has four Grammys and is up for three more this weekend, including a nod for Djesse Vol 3 in the Album Of The Year category. He has co-writing credits on Coldplay’s Everyday Life, which is also in the running for Album Of The Year.

Djesse Vol 3 has sales of 3,425 in the UK, so he’s all set for lift-off as word spreads about his songwriting abilities.

“The prestige of the Grammy Awards is an amazing vehicle for us to introduce the pure genius of Jacob Collier and his music to more people,” said Laura Monks, co-MD at Decca. “The respect Jacob has garnered from his peers is undeniable, but since these latest nominations we’ve seen music fans of all genres start flocking to him with audience growth on all of his social media profiles off the scale! I have never worked with an artist able to communicate on so many different levels with such a broad spectrum of people.

“We’ll be promoting Jacob’s Djesse Vol 3 album in the coming weeks and are excited for Jacob to complete his Djesse journey soon.”

Taylor Swift, Post Malone and Jhené Aiko are also contenders in the Album Of The Year category.

Beyoncé has the most nominations this year on nine, with six each for Dua Lipa, Taylor Swift and Roddy Ricch.