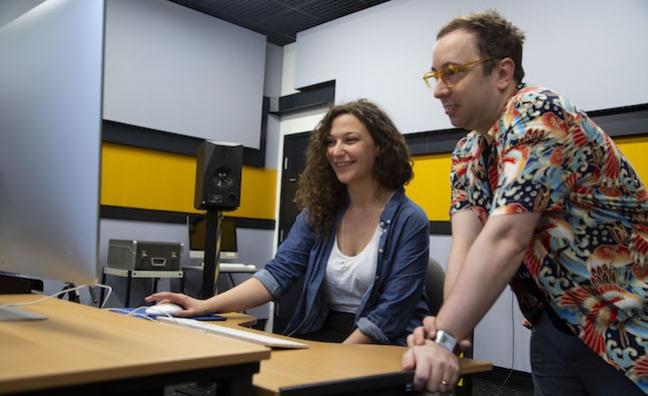 EMI Production Music has partnered with Goldsmiths, University of London to release and market film and TV music composed by students.

The partnership launches this week with the release of Goldsmiths: Sounds One, a compilation album of 18 tracks composed by 15 students and recent graduates from the department of music’s postgraduate programmes.

The album is being made available through EMI Production Music’s search system, which is used by media clients worldwide who are looking for music for film, TV and other media projects. The aim is for EMI Production Music – a division of Sony/ATV – to release further albums of music composed and recorded by the University’s students.

The Goldsmiths album is the brainchild of EMI Production Music content and distribution manager, Paul Sandell (pictured, right, with student Lamis Harper, who features on the album). The project is co-produced by the university’s associate music lecturer James Ewers and his colleague Ian Gardiner, who is senior lecturer and convenor for MMus module composition and moving image media. The album covers a number of genres, including traditional piano, classical, world music, ambient and electronic.

Ewers said: “Paul Sandell approached us with the idea of publishing an album that would represent the sheer variety of cutting-edge work created by our students and place it on an international platform. At least 50 submissions from postgraduate students and recent alumni were whittled down to a final 18. It’s such a strong body of work. It’s fresh and eclectic, and has great potential to enhance all types of media.”

EMI Production Music global director, Alex Black, said: “Giving talented composers the opportunity to create new copyrights and masters for our catalogues is at the heart of what we do at EMI Production Music. Goldsmiths University has a very strong history with the arts and it’s a real privilege for us to be able to forge creative connections on a project like this.”

Paul Sandell added: “The students learn all about production music composition at the University so they have the skills to help them flourish as composers. The music submitted by the Goldsmiths students did not disappoint and we hope this is the first of many collaborations with Goldsmiths which will give many students the opportunity to start their professional composition careers.”

Goldsmiths: Sounds One can be previewed via SoundCloud.