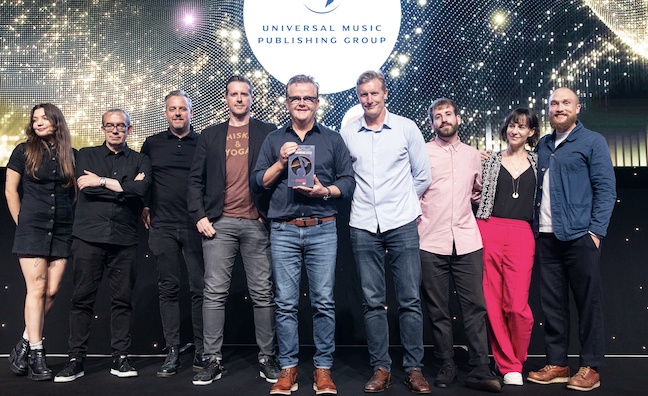 Mike McCormack has paid tribute to the strength of the whole music industry for the work it did throughout 2020, as the pandemic hit hard.

The Universal Music Publishing Group MD (pictured above, holding award, with his team) was celebrating his company's Music Week Awards win for publisher of the year, which he described as "a real shock".

UMPG writer Kid Harpoon was named Music Week songwriter of the year in 2020, primarily for his work with Harry Styles, who is also signed to the company's roster, along with Dua Lipa, Burna Boy and many more.

We sat down with McCormack to reflect on a tumultuous year, as he revealed just how tough it was for music to break through during 2020, and paid tribute to his staff and the roster.

There's a really diverse mix on your roster…
“Oh yes. I said on stage, we invest in people and we invest in talent. Sometimes people’s perception of publishing companies is that they just buy stuff. There’s so much talk about this investment, or this costing 10 million, or that costing this… We still invest in talent. Look at all the new stuff we’ve got coming, Griff, Holly Humberstone, the new Little Simz album, which is amazing. That’s what we do, and sometimes it’s huge and massive, sometimes it’s culturally important and sometimes it doesn’t do anything, but it’s not going to stop what we do. And that’s a global perspective. Jody Gerson in the US, she’s the same, she’s an A&R person, and that runs through the whole company. I’ve been here 23 years and that’s what we do. That’s why we signed Adele when she was a 17-year-old girl from Tottenham, that’s why we signed Lily Allen when she’d just been dropped from her label, it’s why we signed The Killers when nobody else even put an offer on the table. It’s what we’ve always done and it’s what we’ll continue to do.”

The whole industry needs to see that if you keep on investing and pushing on, you can be a global star

How did the pandemic affect the publishing world?
“It was a lot harder for talent to get through. Instead of having those critical moments, where you feel a quantum leap forward, everything was moving forward by millimetres, no matter how much hard work artists were putting in. For new artists, to try and develop and connect in a market that was completely virtual was nigh on impossible. We were out with Griff last night, we did our signing dinner a year-and-a-half late and I was talking to her about it. She was getting up every day and doing 15 interviews with people she’d never met, sitting in her bedroom, and that was her daily grind, throughout that year. And that is so tough. Because music is so much about connection, to do that all virtually is really difficult. Especially in a market that has become so quick-burning, where people don’t even want to hear a second verse, they’re happy with a song that’s a minute or a minute-and-a-half long. That element of craft has been harder and harder, it’s been tougher for songwriters and for new artists. So few have really come through in a huge way. There’s a lot of very promising green shoots, but there’s not one or two where you go, ‘That is Ed Sheeran level, that is Adele level’. And the whole industry needs to see that, to just believe that if you keep on investing and keep pushing on, there’s still a chance that you can be a global star."

What’s it like to be in the room tonight?
“It’s just brilliant. Number one, it’s just nice to be out of my pyjamas and putting on, well, half a suit. [Laughs]. It’s brilliant. Someone said it’s like a school reunion, that’s how it feels. There’s so many people I haven’t seen for two years, but it feels like yesterday. It sounds so cheesy, but it does. I’m very happy to be here, very happy we’ve won this and it’s nice to know all that hard work hasn’t gone unnoticed, that’s the best thing.”