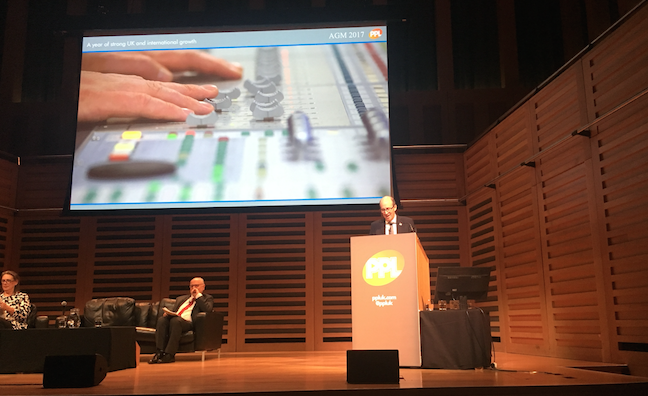 PPL chief executive Peter Leathem hailed the organisation’s record-breaking 2016 performance as “an important landmark on our journey of seeking to provide better and better services” at this morning’s (June 8) AGM in London.

Held at Kings Cross’ Kings Way, the 2017 PPL AGM was centered largely around its financial performance in 2016, which saw revenues hit £212.1 million, exceeding the £200m mark for the first time ever. Leathem outlined the revenues made from its international business as key, with global earnings up 32% to £48.3m.

“By the end of 2016, we had 82 agreements in place across 39 countries, strengthening our position as the market leader in the management of global neighbouring rights for record companies and performers and supporting the recruitment and retention of an increasing number of members to our international collections service,” he said. “As the global neighbouring rights market continues to grow, our international service remains a key priority for us.”

The company’s financial director, Chris Barton, also celebrated last year’s revenues and expressed his optimism for further growth in the years to come.

“We've delivered strong growth for a number of years across all revenue streams,” he said. “It's been a year of high notes. We've continued to grow and deliver results. 2017 should be no different.”

Elsewhere, Leathem discussed PPL’s joint venture with PRS For Music, which will see both organisation’s come together to open a new 200-person office in Leicester later this year. And while there were no updates as to when the office might be open for business, Leathem did take the opportunity to pay tribute to the work being done by both parties to ensure the project hits the ground running.

“There is still much work to do before we can go live but I would particularly like to thank the CEO of PRS for Music Robert Ashcroft for agreeing with me last year to enter into the joint venture and for all his great friendship and support as we have progressed the project,” he stated. “I would also like thank PRS’s commercial director Paul Clements, who is leading the project for PRS for Music, also for his friendship, and the excellent spirit of co-operation in which this joint venture project is being conducted. It bodes well not just for the future success of the joint venture, but also the wider opportunities for future collaboration between PPL and PRS for Music.”

In his closing address, Leathem reflected on the five years he has now served as PPL chief executive, before stating his view that the future hold an abundance of opportunities for growth in the years to come.

“Over the last five years we have grown our revenue collections by £58.6m or 38.2% during a period of low inflation and for a company that is now 83 years old. As well as collecting significantly more money, in five years we have more than doubled - to over 11m - the number of sound recordings for which we now hold data, which has helped to contribute to the growth in the number of performers and recording rightsholders now being paid by PPL. The number of performer and recording rightsholders paid five years ago was just over 31,000 and in 2016, as mentioned earlier, it was over 92,000.  These are significant achievements over a five-year period.”

Meanwhile, it was announced at the AGM that Leathem, Peter Radice and Adrian Sear had all been re-elected as PPL board directors.

Furthermore, PPL revealed the Top 10 most listened to songs and artists of 2016. You can view these in full below.

The PPL 2016 Most Played Artist Chart

The PPL 2016 Most Played Track Chart