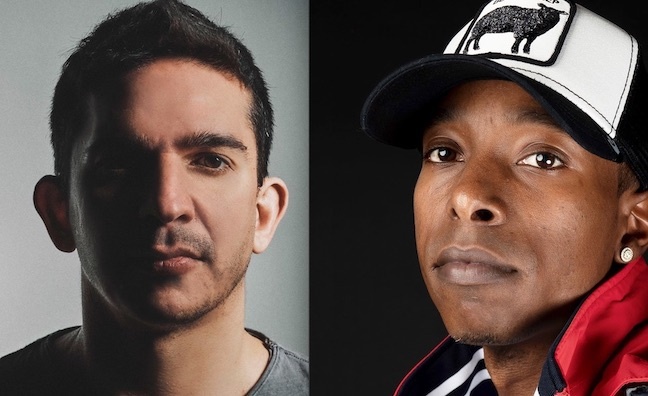 The hires follow Sentric’s move into North America and establish a presence in all the major markets within the territory.

Lou Plaia co-founded ReverbNation in 2006, and exited after it was sold to BandLab in 2019. Prior to ReverbNation, Plaia was the head of marketing and artist development for Atlantic Records imprint Lava Records. For a decade before that, he worked at Atlantic Records, where his last role was VP of strategic marketing.

Kebu Commissiong (pictured right) has partnered with artists such as Sean Kingston, Ayo & Teo, Azjah, Rayven Justice and Grammy-nominated producer Drumma Boy Fresh. He is known for his role as VP at Atlanta-based record label Big Cat Records and Tommy Boy Music. Kebu also worked as head of A&R for Gas Media Group, where he oversaw the music partnerships department.

Carlos Escalona Cruz (pictured left) is a Grammy and BMI award winning producer, DJ artist and executive. He is the co-founder of HitMusic 21 Productions, a New York based production, artist development and artist services venture, with a focus on the US Latin market and LATAM. Cruz is known for his work with artists including Marc Anthony, Fito Páez, Paulina Rubio and Chino&Nacho.

Cruz signed to Warner Music Group in 2019. In 2022, he was elected to the NY chapter of the Recording Academy.

DuFour began his career with NYC-based the Cornerstone Agency/The Fader, where he worked on radio promotion for The Strokes, White Stripes, Kings Of Leon and more, as well as executing experiential marketing campaigns for large international brands such as Vitamin Water, Diesel, Bushmills, and more.

All four will take on A&R director roles at Sentric in their respective territories, with DuFour covering the Midwest from Chicago, Commissiong covering the South East from Atlanta, Plaia covering the East Coast from New York and Cruz covering the US based Latin market and LATAM. All four will report directly to Simon Perry, president of Sentric North America.

Simon Perry said: “A publishing business in 2022 needs to be a finely tuned balance between understanding the complexities of existing structures, and an entrepreneurial 'can do' attitude to crafting a new model for a more transparent digital future.

“To deliver on that core belief, we're lucky to have assembled an initial group of individuals who are equally passionate about meeting our writers and publishers' needs today, as they are committed to exploring where music and technology can take all of us tomorrow. This exceptional first cohort of A&R entrepreneurs supports our wider mission of enabling innovation around our clients’ artistry, and goes to our on-going commitment to deliver best in class publishing services in North America.”

Lou Plaia said: “After spending half my career working only with major label artists, and the other half working only with emerging artists, I now get to work with artists and songwriters at all stages of their careers. I'm truly excited to bring songwriters and their business partners into the Sentric system to help them achieve maximum success, and I'm honoured to have the opportunity to work with such an amazing team with great leaders.”

Kebu Commissioning said: “Atlanta and the South East are fast becoming one the most important markets for music. I’m excited to bring my experience and energy to represent Sentric Music’s forward thinking mindset to this thriving community of songwriters and creators.”

Carlos Escalona Cruz said: “The global Latin market has seen exponential growth recently, and I believe Sentric is the right publishing company with the best model to service this community. I’m really looking forward to being part of the new team they’re building, and excited to grow this part of the business in South America and beyond!”

Matt DuFour added: “I had the pleasure of building a publishing admin catalogue with Sentric at a previous job, so I was keenly aware of the company’s artist first ethos, passionate staff and experienced, knowledgeable leadership. When I heard Simon was putting together a North American A&R team, I jumped at the chance to get involved.”

Based in Liverpool, with offices in London, Hamburg and New York, Sentric represents more than 3.8 million works and over 400,000 songwriters, either directly or via admin/co-publishing deals with industry partners, including music publishers, independent labels, management companies and distributors.