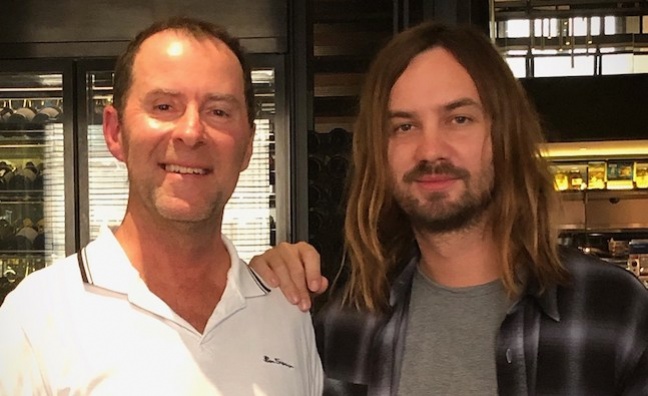 Sony/ATV has announced the expansion of its exclusive agreement with Tame Impala’s Kevin Parker to cover worldwide representation of his future songs.

Tame Impala narrowly missed out on No.1 with new album The Slow Rush (Fiction), which opened at No.3

Jon Platt, chairman and CEO of Sony/ATV, said: "I am a huge fan of Kevin Parker. He is an incredible songwriter whose impressive ascent with Tame Impala makes him one of the premier creators and musicians of the past decade. Kevin's creative and professional relationship with Damian and the passionate team at Sony/ATV Australia has achieved great success, and we are well positioned globally to provide seamless support for this next dynamic phase of Kevin's career."

Damian Trotter (pictured with Parker), MD of Sony/ATV Australia, said: "Having represented Kevin Parker in Australia for more than 10 years, I am incredibly proud and excited that Sony/ATV is now extending our publishing agreement with Kevin for the rest of the world. I want to thank Jon Platt for his support, as he has been driving to make this happen from literally his first day on the job.

“Tame Impala is unquestionably one of the most respected, original and exciting bands on the planet and as the sole writer, producer, vocalist and engineer, who also plays every instrument on each of their albums, Kevin Parker is for all intents and purposes, Tame Impala. He is a once in a generation artist and I believe he is only just scratching the surface of his potential."

"I'm super excited to be re-signing with Sony/ATV and extending my relationship with them from Australia to worldwide,” said Parker. “Damian Trotter has become my good friend and someone I can rely on to take good care of my words and melodies. It's also an honour to now be working with such a legendary figure in music as Jon Platt.”

As a producer, Parker has worked with artists including Kendrick Lamar, Miguel, A$AP Rocky, The Flaming Lips, Theophilus London and Mick Jagger. He also contributed to albums from Kanye West and Travis Scott and has worked with ZHU and Kali Uchis.

Tame Impala headlined Coachella in 2019 and played The O2. A headline show at All Points East takes place on May 23.