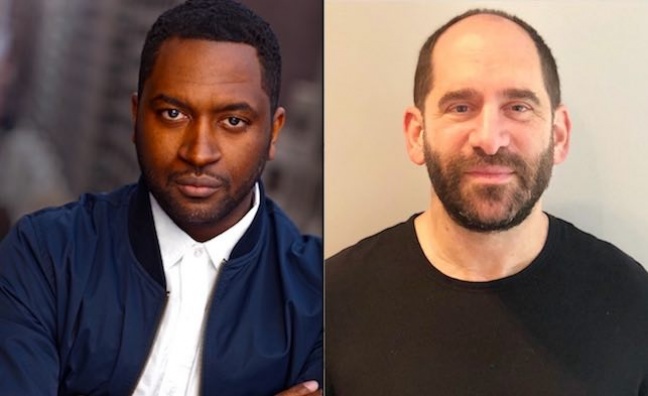 Universal Music Publishing Group has named David Gray (pictured right) and Walter Jones (left) as co-heads, A&R in the US. Gray has relocated to New York City and Jones will continue to be based in Santa Monica.

They will lead the team in finding and developing rising talent, and support legacy talent in providing opportunities to further their careers. In addition, the executives will lead the growth of UMPG’s creative teams across coasts.

Jody Gerson, UMPG chairman and CEO, said: “David and Walter are accomplished A&R executives who have helped develop some of the brightest creative talent. David is a respected and experienced executive who has built tremendous success with Shawn Mendes, the Jonas Brothers, Demi Lovato and Logic. Walter is an excellent leader and trusted publishing A&R for HER, Quavo, Lil Baby and Metro Boomin. Together, they form a strong partnership and lead the best A&R team in the industry.”

Gray said: “There is more opportunity than ever before for songwriters and UMPG is honoured to play a key role in supporting talent who moves culture. I very much look forward to the future, and am grateful to Jody for her confidence in me and her support of our team.”

Jones said: “I am excited to co-head UMPG’s incredible A&R team and am inspired by Jody’s commitment and mentorship to new executive talent. I look forward to this exciting new chapter and thank Jody Gerson for giving me the opportunity to contribute to the company’s growth, innovation and success.”

In his previous role at UMPG, Gray served as EVP, head of West Coast A&R. He is responsible for the signing of artists including Shawn Mendes, Nick Jonas, Joe Jonas/Dnce, Demi Lovato and Logic.

Gray previously held a wide range of music industry positions including as an artist, songwriter, music publisher and TV music executive. He served as A&R executive at Zomba and David Massey’s Daylight Records imprint at Sony Music. Gray also served as SVP A&R at Syco Music, developing artists signed to the label via TV shows X Factor and America’s Got Talent. Gray started his career as a songwriter signed to UMPG and was lead singer of band Idle Wilds (RCA Records).