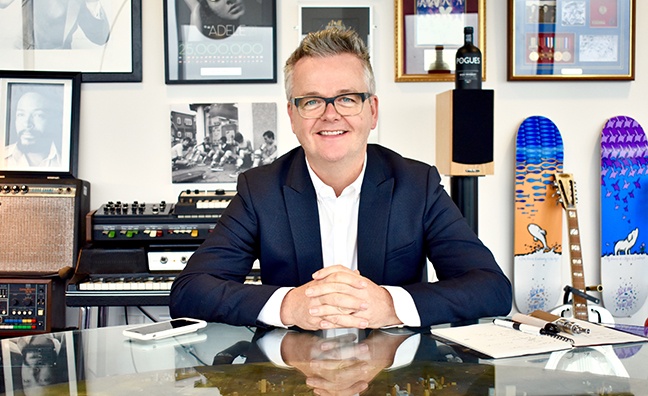 Normally that would mean the great and the good of the publishing and songwriting sectors congregating in the Grosvenor House Hotel and, afterwards, The Audley pub to celebrate the winners and discuss the latest goings-on in the sector. And, in recent years, Music Week’s annual co-writing survey has been top of the agenda.

This year, like everything else, the ceremony has gone virtual, thanks to the on-going effects of the coronavirus pandemic. But you can still expect our latest co-writing stats to dominate industry conversation – especially as, for the first time since we first published the research in 2016, the number of writers behind the UK’s biggest hits has actually fallen.

The full, exclusive details on this year’s numbers can be found in this week’s issue of Music Week, available now, or by clicking here. But this trend was actually predicted last year by Universal Music Publishing Group UK MD Mike McCormack, a man always in his element at the Ivors and whose company is the publishing home for both Eilish and Walker. UMPG will look to retain its 2019 Publisher Of The Year title at the upcoming Music Week Awards 2020, and is also shortlisted for Sync Team Of The Year. So who better to sit down with and talk about the latest songwriting trends? Grab yourself a drink, pretend you’re in The Audley and check this out…

So why did the average number of co-writers go down by half a person this year?
“Well, I never thought that half a person was contributing much anyway! I remember last year I mentioned Billie Eilish as a compass point for where songwriting was going. Look now, Harry Styles is No.1 in America. Tom Walker wrote 100% of Just You And I, which ended up becoming a massive hit. People just want something authentic and they can feel those records that are very generic. They want something that moves them.”

Has the industry mentality shifted away from mass co-writes?
“Possibly, or it could just be that some of the artists, who have very strong opinions about who they are and who they want to be, are just writing better songs. And A&R people are getting bored of having to do all the work and are looking for artists who have a strong sense of who they are. If you look at we’ve signed – Maisie Peters, Easy Life, Alfie Templeman, Little Simz – they’re all writing the majority of their songs. Some of them are regularly writing 100% of them – I was knocked out that Griff could write and produce 100% tracks on her own. I know if you spoke to the man in the street they’d say, ‘Surely that’s what artists do anyway?’, but we know that is really not normal. She’s an exception to the rule.”

Is it difficult for publishers and labels to back people who want to write on their own?
“Sometimes. But remember, Billie Eilish was getting her own thing going before anyone was involved. The record company could see it was connecting and I defy anyone to listen to those songs and say they’re not brilliant songs. If you’ve struck gold and found a writer as self-contained as that, I genuinely don’t think A&Rs want to cut and paste these songs. Every A&R wants to find a songwriter who’s a genius and can do it all on their own, or at least as much as possible, so they only have to add the bits and pieces that are needed. You hear Billie Eilish and the quality of the songwriting and you think, ‘Fantastic, we’re just going to keep on supporting this’. And you’ll see more and more A&R people signing artists that can do that.”

Given the debate around streaming payments, are some writers steering away from sampling and interpolating in order to retain a larger cut of a song?
“Simple answer: yes. It’s good from a purely financial point of view, but artists also want something that reflects who they are a lot more, and the general public want that too, so they’re just working harder to come up with their own original ideas.”

A lot of older songs, generally written by fewer people, also made last year’s Top 100. Does that show the long-term value of 100% copyrights?
“Completely. From the very beginning that’s what I’ve been trying to do and encourage my team to do: let’s not play the Moneyball game on publishing of trying to get bits and pieces, let’s sign real artists and real talent. Look at Harry Styles, Tom Walker, Dua Lipa and all the new artists we’ve got coming; they’re all people who have got real songwriting talent. When we signed The Killers 15 years ago, nobody cared about them, but we got 100% of Mr Brightside and that has been commercially an extremely successful deal for us. I’ve seen the benefit of that throughout the years.”

Will coronavirus accelerate the trend for fewer writers?
“I’m fascinated to see what comes out of this period and we’re not really going to know until early next year. It’s pretty obvious there’s going to be a whole heap of superstars that have been sat with a lot of time on their hands that they weren’t planning on having, so we’re going to see a lot of product next year from big and established artists. We’ve never had a period where there’s been so much free time for these people to really sit in a studio and be very introspective about what they’re doing. They may come up with some incredibly maudlin LP or will it be the opposite: something very optimistic? I hope we’re not going to have a slew of quadruple concept albums about some dystopian future! Or maybe they’ll write 100 songs and condense it down to 10 of the very best. It could be brilliant, it could be awful – but that’s life, isn’t it?”