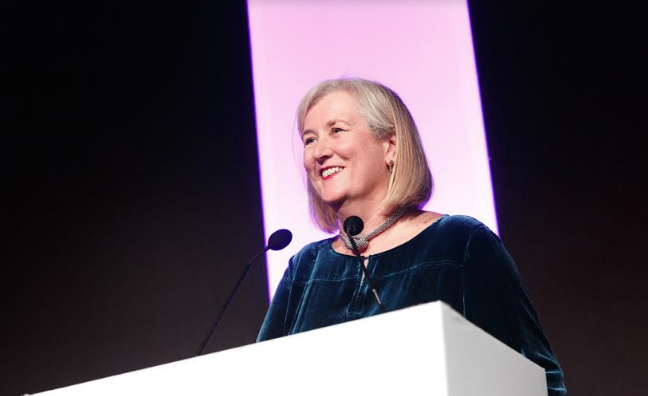 When MPA Group Of Companies CEO Jane Dyball picked up the Outstanding Contribution award at last week’s Music Week Women In Music Awards, it was a rare foray into the limelight for one of the biz’s self-confessed “behind the scenes” people.

But her barnstorming acceptance speech revealed that, while she has an impeccable track record as a publisher, licensor and negotiator at companies from Virgin Music to Warner/Chappell, the MCPS and MPA, she also offers a rare – and extremely funny – insight into the music business.

Dyball appears on the front cover of this week’s special Women In Music edition of Music Week, in a no-holds-barred interview that covers her entire career. So here, in recognition of one of the industry’s unsung heroes – at least until Music Week stepped in – are a small selection of soundbites from Jane Dyball’s extensive repertoire…

DYBALL ON… HER SUCCESS

“I do stuff behind the scenes. It’s good that that gets recognised but it’s not that sexy kind of role where you can say, ‘I went to a gig and discovered a young Bono’. I’m never the smartest person in the room. But maybe that’s an achievement, surrounding yourself with people who are smarter than you are…”

“You really bought into the fact that you were working for Richard. You’d play rounders at his house in the country, you’d go sailing, you’d go horse riding. I remember having to play tennis with him as my partner, which was terrifying because I could see how competitive he was and I was very aware of my own skill set in that department! So, even though he was spending a lot of time doing planes and stuff, you felt that you were working in a very personal, family business.”

“We made a mess of the ringtone market, which was just publishing before they started doing mastertones. We lost a lot of money because of how licensing was territorial. I used to have a visual image of the map of Europe with these ravines between France and Germany, and all of the money rolling off into the ravine.”

DYBALL ON… RADIOHEAD’S IN RAINBOWS “PAY WHAT YOU WANT” PROJECT

“We just made it up as we went along. You couldn’t have done it with many people. I did say to Bryce [Edge, Radiohead co-manager], ‘This could all go horribly wrong’ and he said, ‘Yes, but it really doesn’t matter’.”

DYBALL ON… THE MCPS

“When I started, it was like Dad’s Army. It was the very old, the very young and the infirm.”

DYBALL ON… THE INDUSTRY BOYS’ CLUB

“I still sit in meetings where it’s me and 21 men. I’ve been on trips abroad where I’m the only woman. You go out, have dinner, come back at 1am, everybody says goodnight and then the next day you discover that everybody, having got rid of you, has gone out to the lapdancing club. Do you think, ‘Fuck, I was totally excluded, that’s where they’ve done all the business’, or do you think, ‘Why would I want to be going anywhere near a lapdancing club? Why on earth would I want to be part of that gang?’”

For the full Jane Dyball interview, including her plans for when she leaves the MPA next year, see this week’s very special print edition of Music Week or click here. To subscribe and never miss a vital music biz story, click here.