"We've been making good progress doing things together": Inside the collaborative future of PPL and PRS 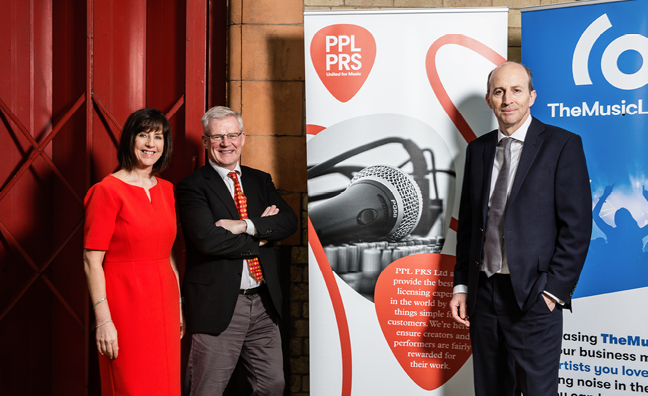 In the cover story of the new issue of Music Week, Robert Ashcroft, Peter Leathem, and Suzanne Smith take us inside the new joint venture between the UK’s two leading collection societies: PPL and PRS. The PPL-PRS Ltd JV – a story first reported by Music Week way back in February 2016 – makes it one of the biggest companies in the UK music industry, with revenues likely to approach £300 million.

To find out more, Music Week ventured to their new base of operations in Leicester to see whether PPL-PRS Ltd can pull in enough revenue (with the single ‘The Music Licence’ replacing the separate ones of old) to justify the disruption and start-up costs, and make the biz wake up to the huge value of public performance licensing.

Behind all of this, however, the long relationship between PRS (established 1914) and PPL (founded in 1934) has more often centred on rivalry, occasionally even antipathy, than cooperation. With the emergence of PPL-PRS suggesting that is very much a thing of the past, the obvious question raised is whether there is even more scope for collaboration between PRS and PPL going forward.

“There will be all sorts of things where we’ll be able to do things more efficiently together, investments and systems or whatever," PRS CEO Robert Ashcroft exclusively told Music Week. "But it’s also really important to recognise that, when we had the Competition & Markets Authority approve the JV, they [said they] wanted to see the tariffs remain separate. We report to different constituencies, the governance remains separate and we’ve come together in this joint company in a way that certainly reflects our long experience. After many years of working with MCPS and  our relationship with GEMA and STEM [in ICE], we understand now – after years – how to make these things work best together. We’re very happy with the way that this has been structured.”

PPL CEO Peter Leathem echoed Ashcroft's sentiments, stressing that neither company is scared of change and that both are keen to look for other opportunities going forward.

“We’ve been doing smaller things as we go along," reflected Leathem. "There are not many music events now where we don’t appear together. We’ve also started working together with the PRS Foundation, so we’ve started to give money to the Momentum Fund and International Showcase Fund. I’ll be on stage at The Great Escape with Vanessa Reed, talking about our work together – so there’s collaboration. There’s not one thing where you go, ‘That’s massive’, there are just lots of little things where you go in a direction, thinking: ‘If we end up being in the same place and talking to the same performer who’s also a songwriter, can we do things together?’"

We’ve been making good progress doing lots of joint things together, we’ll carry on doing those and we want to see how that all pans out

Leathem went on to outline the scope for future collaborations.

"There’s been a lot of collaboration around member services; they’re not big ventures, just much better sharing of who’s going to be where, could we do that together, could we do joint marketing," continued Leathem. "It’s about trying to share costs and know-how. That’s where the direction of travel with the organisations is going. A lot of our top teams have seen how much success we’ve had and how much collaboration there's been on this JV, so there’s good work going across [the companies], our international and member services teams are talking to each other so we’ll be looking to see where the opportunities are.”

Looming behind mere collaboration, however, is also the somewhat larger question of whether it would make sense for PRS and PPL to ultimately merge into one.

Both Leathem and Suzanne Smith stressed that, for now, at least their priority is making sure that the initial merger is a continued success.

“It’s one of those things where we’ve just been getting on and focusing on things and we'll just carry on working together and see where it takes us," said Leathem. "It can be counter-productive to start saying, ‘This can happen’ or ‘That can happen’. We’ve been making good progress doing lots of joint things together, we’ll carry on doing those and we want to see how that all pans out.”

“It’s been a lot of hard work, with a lot of blood, sweat and tears to get to this point," added Smith. "It’s been hard work from everybody and everybody’s just pleased to be issuing The Music Licence.”

To read Music Week's full PPL/PRS cover story, pick up a copy of the latest issue. Subscribers can read it here. To subscribe and never miss a big industry story, click here.