On The Radar: Honey Hahs 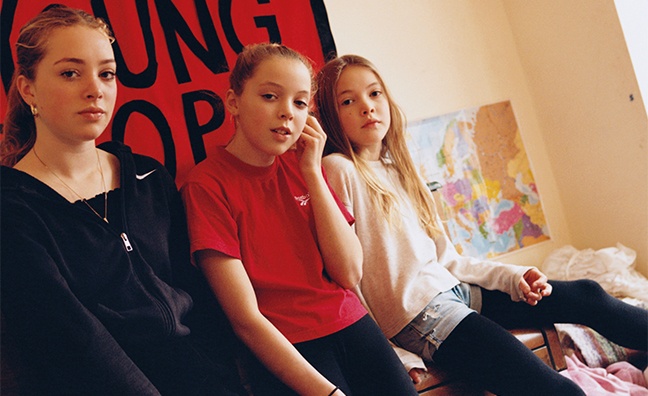 If you’ve been anywhere near a music venue in South London over the past couple of years, you’ll likely have seen Honey Hahs. Sisters Rowan, Robin and Sylvie Hallett are aged 16, 13 and 11 respectively, and haven’t looked back since they swapped busking on London’s South Bank (where their dad Tim has performed in a wetsuit and written on the spot poetry) for gigging in their neighbourhood’s pubs. Signed to Rough Trade by Jeannette Lee, they recorded upcoming debut album Dear Someone Happy Something with former Pulp bassist Steve Mackey in a fish factory. Slowly but surely, their threadbare songs, characterised by colourful lyrics, imagination and harmonies that stop you in your tracks, are gaining traction.

“Being in the music industry is fun,” Rowan tells Music Week. “But what was our tiny little sister band is [now] being written about, and people you barely know will see it.” More than that, Rowan says the attention is “scary, because journalists are forever writing things down you don’t even remember saying and wish you hadn’t said. Even so, Rowan, who plays guitar and piano, bassist Robin and drummer Sylvie accept that the scrutiny will help their music spread. And the world could sure do with tracks such as OK, Beer Fear, Away and Stop Him, which are by turns spooky, affecting and funny. “The songs are really random. Anything that catches our attention that we feel is worthy we’ll write about,” Rowan says. “For example, our Grandpa passed away recently and we wrote a song in memory of him for his funeral.”

Familial closeness is perhaps the most intriguing thing about Honey Hahs, whose sweet, not-quite-indie-pop sound was initially informed by their parents playing Wally Whyton’s ’60s nursery rhymes and Californian harmony singers Lennon And Maisy. “We are always together and share pretty much all the same experiences, so it is easier when writing songs and doing gigs,” Rowan says. “Being sisters means we are better at doing harmonies because we know each other so well.” Digging deeper into the album, Cardi B fan Rowan is careful to point out that its 13 songs have been maturing for a while. “The album was recorded so long ago and the songs were mostly written even longer ago. So they are from my outlook when I was extremely innocent. My concerns were the environment and being happy.”

Rowan’s not sure about the future, but dreams of making a “very different” second record and touring the world. We finish by trying to define Honey Hahs’ sound. “We don’t try to sound like anything, we sing and play and that’s what comes out,” Rowan offers inconclusively. But her description of Whoever, the one-minute piano track that closes the album, will do just fine. “It is so raw and beautiful. It’s only Sylvie singing with the piano, we really like it.”