On The Radar: Just Mustard 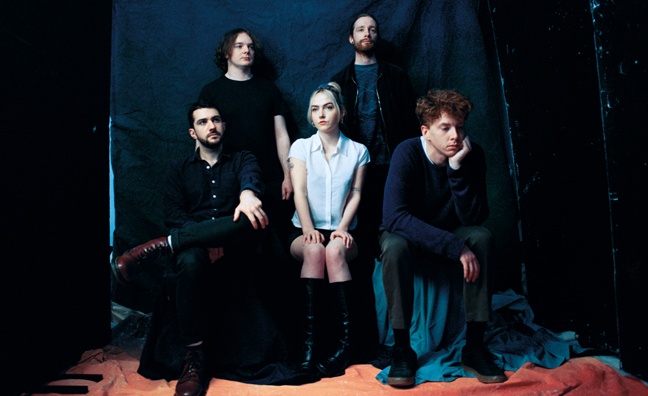 Just Mustard are no ordinary guitar band, and with new album Heart Under, they’re about to break big. Music Week catches up with singer Katie Ball to hear how they’re chasing perfection...

Just Mustard singer Katie Ball begins our interview with a spot of ghostbusting. For some reason – perhaps it’s the dark-hued, all-encompassing character of their sound, or possibly the way her vocals swoop over the music – the lead singer of the hotly-tipped Dundalk band is frequently described as ‘ghostly’ in the press.

“[It happens] in interviews, in reviews,” she says. “I don’t know if everyone’s copying each other or if I genuinely come across that way.”

Well, how would you describe yourself?

“I don’t know!” she answers. “Can anyone describe themselves at all?”

While she is categorically not of the otherworld, Ball does concede that her band’s sound is “spooky, not gothic... Sometimes the guitars can be scary”.

Mixing shoegaze, new wave and crunching industrial noise, Just Mustard’s music is certainly transfixing. Their towering, shape-shifting second album Heart Under (due this month on Partisan) takes the breath away, and stakes a claim to be one of the year’s most invigorating rock records.

With its May 27 release date looming, the five-piece band – completed by guitarists David Noonan and Mete Kalyon, bass player Rob Clarke and drummer Shane Maguire – are on a mammoth promo run, and Ball is speaking on a video call from Antwerp, during their tour with their compatriots and label mates Fontaines DC. This month, they’re in the US, before returning to Europe and the UK, with dates stretching into October. We speak on a rare day off and Ball jokes about how they fill their spare time on the road.

“I like a good gig and an Irish bar with a nice pint of Guinness,” she says, before rolling her eyes and laughing. “I love to experience different cultures by constantly going to Irish bars…”

And, this year, despite being in Austin, Texas for South By Southwest, they were able to mark Saint Patrick’s Day in their usual fashion.

“The whole experience there is intense, [playing] all those shows with no sound checks,” Ball says. “We played three gigs that day, which was a lot. Although to be honest with you we were celebrating during the shows, as well as afterwards.”

Ball doesn’t want to downplay what she feels to be rare good fortune (“It’s exciting and we feel lucky”), but she admits to the odd craving for some respite.

“I think the only thing is that, on tour, you’re always being witnessed,” she says. “There aren’t many points where you can just take the time to be by yourself, when there’s no one looking at you.”

Fortunately, Just Mustard are completely comfortable together, their bond forged over years of companionship. They are the kind of friends who meet because they’re into the same stuff and hang out at the same places, who just started a band organically, pushed together by a local scene.

For Just Mustard, the place was Dundalk (“We have a beach, we have a forest, we have a mountain,” says Ball). More specifically, it was the venue Spirit Store, which overlooks the harbour of the County Louth town. It’s Ball’s local, 10 minutes from her house, and the place where she spent pretty much every Friday night for years. Pre-pandemic, going to Spirit Store didn’t even require making plans: you could just show up and assume that there would be people you knew there.

“We played our first gig, our second gig and most of our early gigs there,” she beams. “And the venue staff were always so supportive. We’re playing there again in June. We’ll probably always play there.”

Their debut release was a self-titled EP in 2016, followed by an album, Wednesday, on local label Pizza Pizza Records in 2018. Their rise brought bigger shows, including a gig with The Cure in 2019, and they signed with Partisan last May, releasing a concert film, Live In Dreams, at the same time.

But until recently, wary of what it takes to become a working musician these days, they all kept their day jobs. Ball worked in a local shop, Soilse Candles, a place she clearly still has affection for (they have collaborated on a special edition candle for the release of Heart Under, with “a burn time of 20 listens”).

“It’s quite hard to make a living out of being in a band, out of music,” reasons the singer. “So really it can often be about just staying at it. You’re tired, you’re working, you’re doing the band. You have two brains you need to switch between, and no money. The main thing it takes is persistence. And the pandemic really slowed everything down.”

Back in 2020, with touring on hold, they jumped straight into making Heart Under, an album with big expectations attached, following Partisan’s success with both Fontaines DC and Idles. The end result is blistering and beautiful in equal parts, both intimate and epic. Just Mustard worked on it for 10 days at Attica Audio Recording in Donegal, with engineer Chris Ryan, before following up with extended home recording sessions.

“I feel more comfortable doing that,” says Ball. “I can chase perfection without worrying that I’m taking recording time from other people.”

But while the pandemic gave them more time to finish Heart Under, after a while being stuck indoors wasn’t so helpful.

“I struggle to be creative without any input or inspiration from the wider world,” Ball admits. “I thrive when I’m experiencing things. I get it in flashes, like, ‘Wow, where did that come from?’ David Lynch says it’s like catching fish. I used to get a lot of inspiration from my dreams, but I stopped writing them down so much.”

Stir crazy or not, Ball’s vocals are compelling and Heart Under is jammed with ideas, tied together by Just Mustard’s focus on not relying too heavily on one hook.

“You might have a great 15-second loop, but how do you make the whole song great for the person listening?” Ball asks. “I like there to be tension in a song, the kind that creates balance, and I like lyrical ambiguity. If people know too much about my motivations, then how can they use the song and apply it to their own situations? It’s really important that people can listen to our music in that way.”

Just Mustard’s music is taking them far and wide, to countries they’ve never been to. After so much waiting and so much work, the band are relishing it.