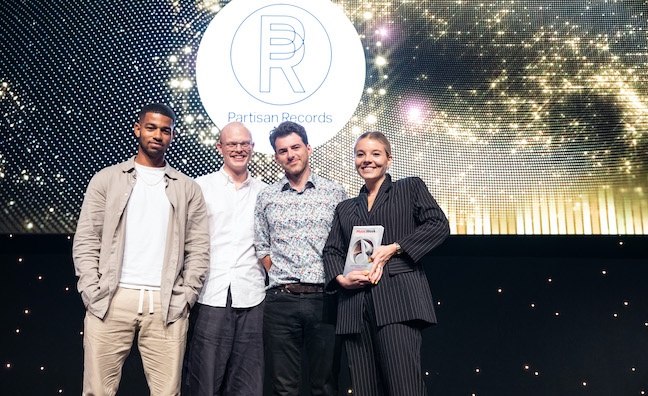 Partisan retained their grip on the Independent Record Company category at the Music Week Awards, following chart success with acts including Idles and Fontaines DC.

But following the win at the ceremony staged at Battersea Evolution last week, Jeff Bell, GM, international at Partisan, was quick to acknowledge the entire independent community.

“It's great,” he told Music Week. “We're in amazing company. Shout out to the independent label community that we get to be a part of. We’re all here to discover artists, so that’s really all there is to it.

“We weren’t expecting it. We've got a couple of new faces on the team, we've grown a bit over the last year and it's nice to be able to celebrate with some new people.”

The label also won the same award last year, although there was no ceremony in 2020 because of the pandemic.

“We felt quite lucky last year because it meant that we didn’t have to give a speech,” said Bell. “So that was the downside of winning this time!”

The trophy reflects success in 2020 when, despite the challenges of Covid, Partisan hit No.2 with Fontaines DC’s A Hero’s Death (41,065 sales to date - Official Charts Company) and scored their first ever No.1 with Idles’ Ultra Mono (46,604 sales).

Bell said that acts on the roster have been working on new music during lockdown periods.

“It was a very strange year for a bunch of reasons,” said Bell. “Funnily enough, both of those bands, and most of the other artists on our label, hunkered down and delivered amazing records there we're about to go into campaigns for as well, which we're excited about.

“We’ve become a lot stronger as a company during this time. But the test is yet to come.”

As well as readying new music, Idles will finally be able to perform songs from Ultra Mono.

“We’re just excited that that band are going to be able to tour that record and play some shows, which is really what was missing for a lot of our artists last year,” said Bell.

“People are just more open to all sorts of music,” he added. “I think it can be a very cathartic year for a lot of fans of these bands to actually experience them live.”

Both Idles and Fontaines DC performed well on vinyl. Bell said the format has built its popularity during the past 18 months, as the label looks to create longevity for its successful releases on vinyl.

“For those people who are in a position to spend money, I think vinyl was at the top of that list,” he told Music Week. “For us, it's about what becomes tomorrow's catalogue.”