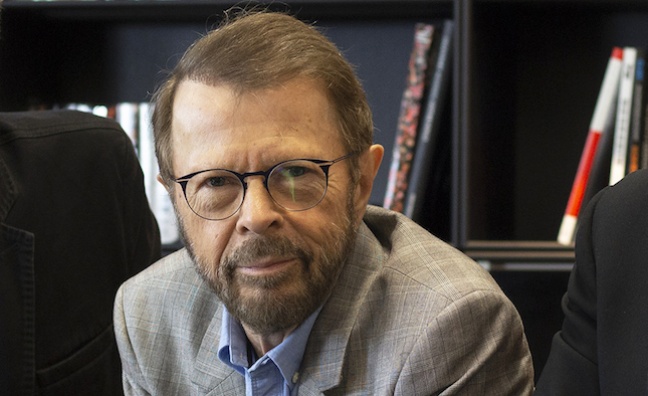 ABBA hitmaker Bjorn Ulvaeus has spoken to Music Week about the co-writing revolution.

According to Music Week research, the average number of credited songwriters needed to write the 100 biggest UK hits of 2019 was 4.77.

It can produce fantastic songs, but sometimes they can become impersonal

"Obviously, that's a different kind of writing," Ulvaeus told Music Week. "It can produce fantastic songs, but sometimes they can become impersonal [because] where's the heart? Who is responsible for this? Whose emotions are we going to go by when there are 15 [writers], so that's easier when there's only two, for instance. It's a different kind of writing, that's what it is."

Amid the ongoing debate over streaming royalty rates, Ulvaeus claimed the business placed "very little" value on songwriters at present.

"If there are 15 of them and one stream pays $000.something, they have to drive a taxi," added Ulvaeus, who quipped the lack of financial rewards for songwriters would have led him to choose a different career if he were an 18-year-old in 2021. "I would have become a civil engineer because I was going  to be educated at university," he said.

Speaking to reporters at last week's Ivor Novello Awards at London's Grosvenor House, Ulvaeus suggested the current system was a "legacy from the analogue time".

"Physical products had to be manufactured and distributed, and that cost a lot of money. So that tipped the balance of the money towards the record companies," he said. "Whereas the publishers, they produced the songs and, if you like, in money terms, it just didn’t cost them so much.

Ulvaeus, co-founder of The Music Rights Awareness Foundation (MRAF) used the platform of the Ivors to launch the Credits Due campaign to increase knowledge and awareness about the importance of having the correct metadata attached to recordings. MRAF has teamed up with The Ivors Academy on the initiative. The trade body has identified an annual £500 million streaming data gap in royalties.

"It's about making sure that with every recording follows five identifiers: IPN, IPI, ISWC, ISRC and ISNI, so if you guys take that responsibility to make sure when you actually write the song - that if you get these codes right - that means you will get credits, that means you will get paid," he said. "This is what I devote a lot of my life to, is to make the songwriter the star of the music industry, because that is where she or he belongs."

Last month, Ulvaeus and Andersson attended an event in London to announce details of ABBA Voyage, the concert directed by Baillie Walsh that will see the band performing digitally with a live 10-piece band. The performances will take place in the purpose-built ABBA Arena at Queen Elizabeth Olympic Park in London from May 27, 2022.