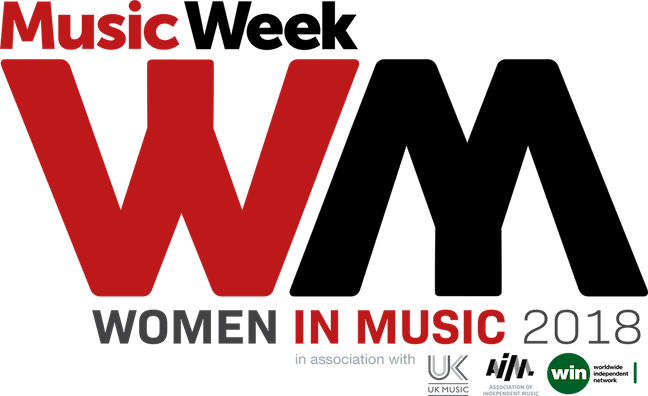 A glittering array of superstar artists and executives have been honoured at the Music Week Women In Music Awards in London today (November 9). Stellar music biz names gathered at The Brewery in London to mark the achievements of this year’s winners, ranging from established names to the next generation of talent in the business.

"Sometimes it hasn't felt like work at all, sometimes it's felt like banging my head against a wall," said Outstanding Contribution winner Jane Dyball, whose raucous speech seemed to sum up the music industry up in a nutshell. The MPA chief drew huge cheers from a crowd that spent swathes of the afternoon on its feet, particularly during Businesswoman Of The Year Joyce Smyth's time on stage, which featured video tributes from Keith Richards and a clapping Mick Jagger.

Elsewhere, Nadine Shah paid heartfelt tribute to Skin while presenting her with the Inspirational Artist gong. Skin's speech marked a hugely rousing moment on an afternoon packed with them. Helen Marquis, Parris O'Loughlin-Hoste and Ms Banks also worked the crowd into a frenzy.

The 12 Roll Of Honour inductees were honoured, too, their staggered trips to the stage punctuated with shouts, screams and plenty of banging on tables.

Regular host Alice Levine, who recently got a new presenting role on BBC Radio 1, returned for an event she’s described as “one of my favourite things to do”. Since the launch in 2014, Levine has been a familiar presence at the celebration of female talent, which has become one of the biggest events in the industry calendar.

“Congratulations, well done, you deserve this, you’re amazing,” said Glynne in a video message. “You work your ass off every day, you grind to the bone and I am so grateful to have you in my life. You inspire me, you are one of the most amazing women that I am around. Since the day that I met you, you have encouraged me to be a better person, a better artist, a better songwriter.”

The coveted Rising Star award went to RCA’s senior urban artist manager and Spotify Who We Be Talks co-presenter, Parris O’Loughlin-Hoste, while the Campaigner Award was presented to Suzanne Bull, CEO of Attitude Is Everything.

For London Night Czar Amy Lamé, recipient of the Music Champion award, the ceremony was a short hop from the daytime half of her role at City Hall.

Joyce Smyth, manager of The Rolling Stones, was named Businesswoman Of The Year at the ceremony — and she received some top video tributes from the rock legends whose careers she's steered through global success.

“I’d like to thank Joyce Smyth so much for keeping us working so hard - I’ve been exhausted for the last few years,” said Sir Mick Jagger. “And I’d like to congratulate her for winning the Businesswoman Of The Year award, well done Joyce!”

“Congratulations, what wonderful news,” said Ronnie Wood. “We are all so proud of you, you totally deserve it [for] all the wonderful things you do for the band - we love you.”

Keith Richards also had his say on the honour: “Let me congratulate you on the wonderful news - well done, girl. Let’s have many more.”

The Inspirational Artist award went to Skin, lead singer of Skunk Anansie, and there were video tributes from her band mates.

“Congratulations Skinny, from the band, we love you,” said Richard ‘Cass’ Lewis. “Have a good night, don’t drink too much."

“We’ll see you in the back of the van for another 25 years,” added Martin ‘Ace’ Kent.

The Company Award for Diversity In The Workplace was presented to PPL. Earlier this year the collection society was one of the few positive examples for the music industry in terms of the gender pay gap.

International Woman Of The Year was revealed as Helen Marquis, YouTube’s global head of music programming. The Channel Islander, who’s been a a major player in the global rollout of YouTube Music, jetted over from California for the ceremony.

The big award of the night was for Outstanding Contribution and the highly deserving recipient was Jane Dyball, whose storied publishing career includes roles at Virgin Music, Warner/Chappell, MCPS and the MPA. Dyball’s worked with everyone from Richard Branson to Radiohead.

“What sets Jane apart for me is her fundamental sense of decency and kindness,” he said. “She really cares about her colleagues, songwriters and publishers being treated fairly.”

Fellow songwriter Miranda Cooper added: “You operate at the highest level of the industry and clearly kick ass. More than anything, though, you are a huge lover of music.”

The 2018 edition of the Music Week Women In Music Awards was staged in partnership with AIM, Worldwide Independent Network and UK Music. Some of the biggest industry names came on board as category sponsors, including Amazon Music, Kobalt, Merlin, Absolute, PRS Foundation, Focusrite and The Music Market. Anxiety UK was this year’s charity partner.

Ahead of today’s ceremony, Music Week revealed 12 new inductees into the Music Week Women In Music Roll Of Honour.