Architects praise the UK heavy music scene as they hit No.1 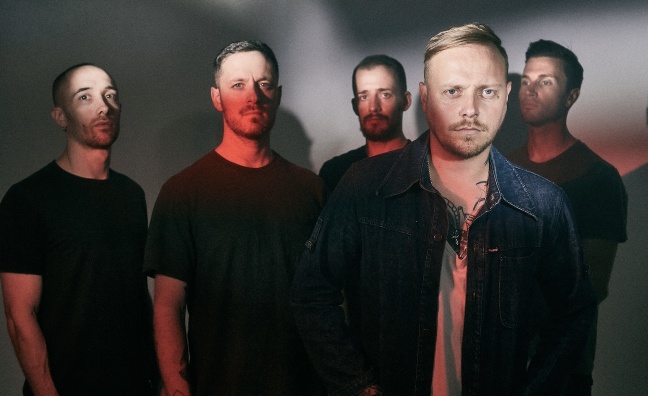 Architects singer Sam Carter has told Music Week that his band’s first ever No.1 album shows the strength of the UK’s heavy music scene.

The band topped the charts with their ninth album, For Those That Wish To Exist after a late surge in physical sales saw it pip Maximo Park’s Nature Always Wins to No.1.

The record finished with 12,542 sales in total, with 8,665 from physical copies, 2,112 from streams and 1,765 from downloads. Released on US label Epitaph with distribution from Proper Music Group, the album scored another first place finish for an independent label, after Bicep (Ninja Tune) and You Me At Six (Underdog) topped the charts in January.

Proper Music is celebrating its second No.1 record of 2021, after working on the You Me At Six campaign.

“We always knew that we had a chance at a Top 3, but I don't think we dared hope for No.1,” said Proper’s boss Drew Hill. “We had quite a few things spaced through the week. Whereas a lot of records have a really big pre-order and a big physical push at the beginning of the week, and then it will maybe tail off, we had lots of initiatives with different retailers that we were dropping at various points.”

Hill thanked indie retailers including Kingston’s Banquet Records for their support, also citing successful a tie-in with HMV and an Amazon flash sale. Architects also played a livestream from the Royal Albert Hall in London prior to the album's release.

“We’ve only been working with Epitaph since the end of last year,” Hill said. “The band delivered a great record and the team there did a fantastic job, there was a very good radio, print and digital campaign with the record. So hats off to the team at the label and management.”

Hill said the No.1 has “caught people by surprise” and predicted that the album will sustain its impact over the coming weeks.

As for Sam Carter and Architects – completed by bassist Alex Dean, guitarists Adam Christianson and Josh Middleton and founding member and drummer Dan Searle – the singer said it would take some time to process the emotion that comes with hitting No.1. Searle’s brother Tom, who was Architects’ guitarist and main songwriter, passed away in 2016 after the release of their seventh record All Our Gods Have Abandoned Us.

“It honestly feels like a dream,” Carter told Music Week. “I can’t even begin to wrap my head around it. I’m still in shock.”

Carter paid tribute to the group’s fanbase. “We did it through our fans and how much they believe in us and care about us,” he said. “I think that’s because we’re really transparent with them, we don’t try and hide anything. We don’t try and act like anything we’re not, we’re just five lads in a band. We want people to know that we’re not perfect and we’re not better than anyone else. We’re just in a band and people really relate to that.”

The singer emphasised the strength of the heavy music scene in the UK at the end of a week that saw a swell of support for Architects, who projected their logo and artwork around London this week.

“For heavy music, it’s amazing, it proves that the scene is bigger than people think,” he said. “It proves that the family side of the heavy music scene is so strong. Everybody pulled together, I’ve never seen anything like last night, it was absolutely insane how people rallied around us. People were buying two records, buying records for people that couldn’t afford to, it was just unbelievable.”

He stressed that For Those That Wish To Exist, which saw Architects expand their sound, adding even further heft, represents an unflinching portrait of the state of the world.

“We live in such weird times, such strange times, we’re stood on the edge of oblivion and time is running out,” he said. “We’re all just sitting there and doing nothing and we’re including ourselves in that. Really, the record is just asking, ‘What are we gonna do? How are we gonna get through this?’ The only way we can really do that is together.”

“Creatively we’re in a spot we’re very proud of,” Carter finished. “We’ve worked immensely hard to get here and today is a really nice moment to sit back and take in how far we’ve come as a group of people and as a band. We’re just so, so proud.”