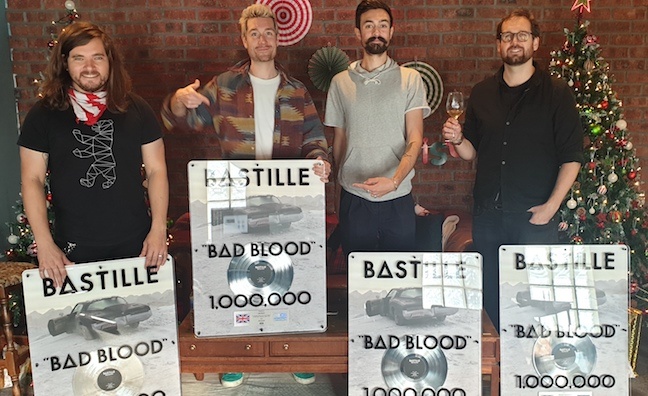 Bastille and EMI have celebrated a sales landmark for the band’s debut album.

Bad Blood, which was released in 2013 and spent three weeks at No.1, passed the million sales mark last week. According to the Official Charts Company, it has racked up 1,000,604 units.

Only 10 debut LPs have achieved a million sales in the last 10 years.

Bastille were taken by surprise with the news during a Zoom call. The band thought they were about to embark on some promo when the label team congratulated them with delivery of their discs and champagne.

"The fact that only 10 debut albums released in the last 10 years have hit one million sales was too big a landmark to miss,” said EMI marketing director Ian Carew. “So, although we couldn't be together to celebrate while in lockdown, we went for the next best thing – a socially distanced, at home, virtual award presentation on Zoom. The band were genuinely surprised as they thought they were having a break from filming to do promo with Korean media.

“As the millionth copy of Bad Blood was sold almost nine years to the day since Bastille signed to EMI, we assembled members of the team who've worked with the band since their debut to raise a glass with them. Hopefully we can celebrate again in person with them very soon."

The consumption of the album reflects the shift in popularity of music formats over the years. Bad Blood has moved 443,329 physical copies, but downloads are not far behind on 397,754. However, in recent years streaming has dominated the performance of the record – album streams now account for 159,521 of its sales.

The album, entirely written and co-produced by frontman Dan Smith, has scored over six million adjusted sales worldwide, according to EMI.