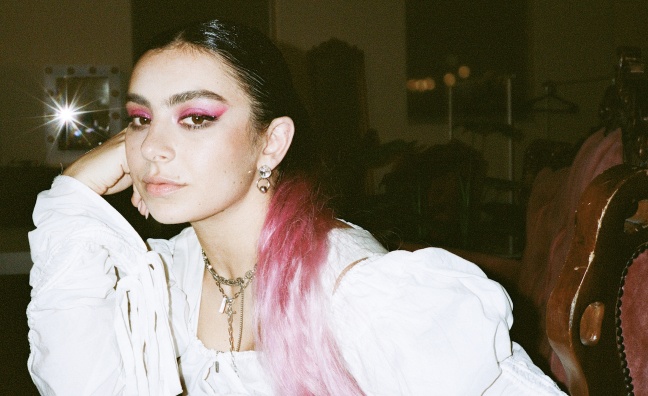 Charli XCX has told Music Week that her new album could change the way the music industry approaches releasing records for good.

The singer made and released How I’m Feeling Now over five weeks in isolation at her home in Los Angeles, and stars on the cover of Music Week’s sound of lockdown special issue, out now. Inside, Charli tells the story of the record with Atlantic co-president Ed Howard, managers Sam Pringle, Twiggy Rowley and Brandon Creed, producer AG Cook and film directors Bradley & Pablo.

She said her album proves that the long lead-time associated with major label releases could change in the future.

“There’s a stigma that albums have to take a long time, and obviously with this album, I’m showing that they don’t,” said Charli. “We’re in a world now where it is quite interesting to play with the dynamic of an album campaign.”

The last Charli XCX album made under a “traditional artist/A&R structure” was 2014’s Sucker, which peaked at No.14 and has 46,667 sales to date.

“I’m pretty singular about A&R, after Sucker it became about me making all of the decisions,” said Charli, who signed with Asylum/Atlantic before its release.

“The label were very up for this project and that was quite surprising. I say that with love. I understand that for them, the speed at which I move is sometimes quite stressful,” she added. “Obviously, I apply a lot of pressure on them to make sure everything goes smoothly. Knowing this, I was expecting they would be a bit hesitant, but they’ve been the most supportive ever.”

Charli XCX involved the fans in the album-making process, opening up decisions on lyrics and artwork via Zoom calls and on social media. She said Atlantic played a key role in embracing these new ideas.

“They’ve really gone in hard with this and have suggested ideas – like doing different artworks for each DSP – that make their life hell,” she said. “I was like, ‘Great!’ Maybe they didn’t think I would go for it, but I did. They’ve moved really quickly and it’s been really impressive. The one thing I worry about for them is that now I’ll expect I can hand in music and mixes hours before the deadline and have a million different artworks all the time!”

The album began the week at No.17 in the album charts, according to Official Charts Company midweek figures. The star told us she abandoned plans towards another album to work on How I’m Feeling Now and isn’t sure she’ll go back to the first project.

“With most pop major label artists, there’s a level of extreme planning, a lot of pre-thought, pre-consideration and set-up,” she said. “That helps in so many ways for the pitch of the album, the longevity of the album and the relationship with the people you’re pitching the album to and I understand why it happens. But that doesn’t excite me that much. I’m really into the sporadicness of what I’m doing right now.

“One thing I will struggle with is, I was making a different album before quarantine and I do love a lot of those songs, but they’re going to feel so old to me if they do eventually come out. It just doesn’t inspire me to talk about songs I made a year-and-a-half ago.”

Charli XCX said that this attitude, along her working process, which is conducted between a close-knit group of collaborators, adds up to a unique approach to making records.

“That’s why my process has sped up and changed so much, maybe it’s not technically what’s best for my streaming career or whatever, but I don’t really care,” she said. “It excites me to move at speed, to be reflective of what’s going on in my life real-time.”

The singer will judge How I’m Feeling Now on its longevity, rather than sales and streams.

“Sales or streams or chart positions just aren’t my priority. It’s not the reason I make music, thinking about that doesn't make for good music,” she said. “Success for this project would be to be able to look back on it as something representative of this situation we’re all in and something that felt like an audiovisual documentation of where I’m at as an artist, but also where my fanbase, my LGBTQ fanbase, my fellow producers and collaborators in our left-pop scene are at this point, what we were feeling and creating. I want it to feel like a time stamp, but also to still sound relevant when this is all over.”

Sales or streams or chart positions just aren’t my priority

Charli XCX also paid tribute to her fans and the “euphoric and emotional” songs they want to hear.

“I thought the album would be something that would make some people feel good, happy and feel challenged,” she said. “The fans know who I am better than almost anyone I work with. They see my music and my journey and are listening from a really pure place, so to get feedback from them is the most interesting thing to me. They care so much for all the right reasons about the creative decisions that I make. They don’t have any agenda, so to involve them made a lot of sense.”

Subscribers can read the interview in full here. Look out for more from Charli XCX and her team throughout the week.