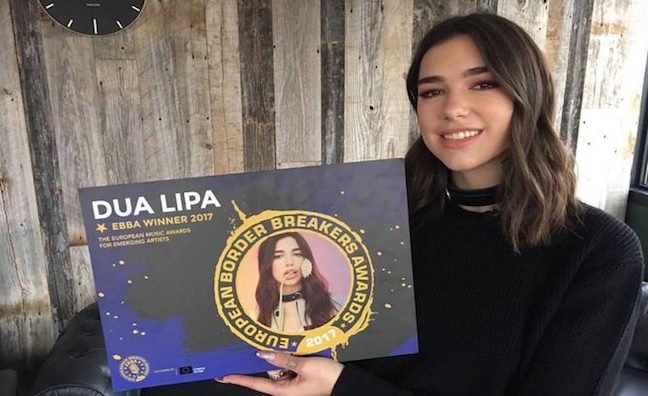 A celebration of emerging European talent ended up with the crowning of Britain's Dua Lipa at the 2017 European Border Breakers Awards (EBBA) in Groningen (Netherlands).

The 21-year-old singer left the stage with the Public Choice Award, thanks to an overwhelming amount of online votes from the public. The artist, signed to Warner Music UK, was picked for an EBBA on the strength of her singles Hotter than Hell and Blow Your Mind (Mwah).

"I am a British from Kosovo and I feel one hundred per cent European," said Lipa upon receiving her prize from the evening's host Jools Holland.

Other EBBA winners included Alan Walker (Norway), Natalie La Rose (Netherlands), Jaakko Eino Kalevi (Finland), Namika (Germany), Hinds (Spain), Walking on Cars (Ireland), Filous (Austria), Jain (France), and Era Istrefiwas (Albania). All the artists performed live during the televised show, except for Istrefiwas who had broken a leg in a skiiing accident. The award show will be broadcast on some 15 channels across Europe in the coming weeks.

Now in their 14th year, the EBBAs are part of the Eurosonic Noorderslag festival, and are awarded to up-and-coming artists whose music crosses borders, based on sales, airplay, streaming and video streaming activity. The initiative is supported by the European Union's Creative Europe programme. Barbara Gessler, responsible for the culture programme at Directorate General Education and Culture in Brussels, stated that these awards were important because they were about "emerging artists." She described the evening as "a celebration of the creative power of Europe."

She added: "We believe we have an identity and we want to support young artists who represent this identity. We all know the difficulties to cross borders, this is why we believe in the need to promote the richness of our repertoire."

This sentiment was echoed by several artists in the evening. Jain, who was described by Jools Holland as "a flowering talent from France," said, "Thanks for supporting European artist. It is important not to forget our identities."

A&R legend Seymour Stein, who signed in his careers artists ranging from The Ramones to Madonna, was interviewed during the show by Holland. The US executive praised European creativity, reminding the audience that the first "big band" he signed was a Dutch band, Focus, which sold a million albums in the 1970s. More recently, Stein signed former EBBA winners Ewert and the Two Dragons from Estonia. "There's quite good music [in Europe]," said Stein.